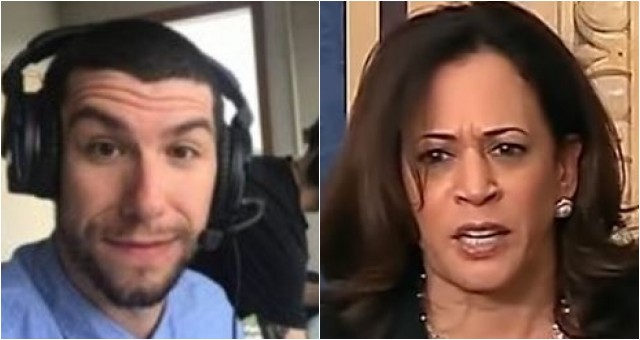 A radio station in Cleveland fired a news anchor this week after her referred to Democrat Kamala Harris as the nation’s “first colored vice presidential candidate,” according to Fox News.

Anchor Kyle Cornell, 26, used the description of Harris in a news promo spot that aired during WTAM radio’s broadcast of a Cleveland Indians baseball game, according to Cleveland.com.

This is what happens when a nation caves to the demands of the few.  We live in a society where “words hurt” mentality not only can get you fired from your place of employment but get you attacked by the very same groups that say that their feelings are hurt by words.

“The U.S. officially has its first colored vice presidential candidate. More coming up after the game on Newsradio WTAM 1100 Cleveland,” Cornell announced

According to what Fox News reported, “Colored” is considered an outdated term because many people associate it with slavery and the Jim Crow era of racial segregation and disenfranchisement but the description continues to be used by the NAACP (National Association for the Advancement of Colored People), a prominent civil rights organization that was founded in 1909.

Kamala Harris is a plague on our nation and the color of her skin has to do with it, it has everything to do with her greed and corruption.

“We need to speak about systemic racism, and when you have one ticket that can say the phrase Black Lives Matter.” ~ Kamala Harris – Full statement can be read by clicking here.

“We are aware of the reference made on WTAM by Kyle Cornell,” Davis said in a statement. “We take this matter very seriously and addressed it immediately. The term used is extremely offensive and does not align with our station’s core values and commitment to the communities we serve. He is no longer with WTAM.”

People losing jobs, their livelihoods, over words offending and hurting is ridiculous and until “We The People” stand up and put an end to the fires in our nation, it will continue to get worse.

Kamala Harris: “I Am Radically in Love with My Country” Then Tells NBC Host That “The reality is that the life of a black person in America has never been treated as fully human.”