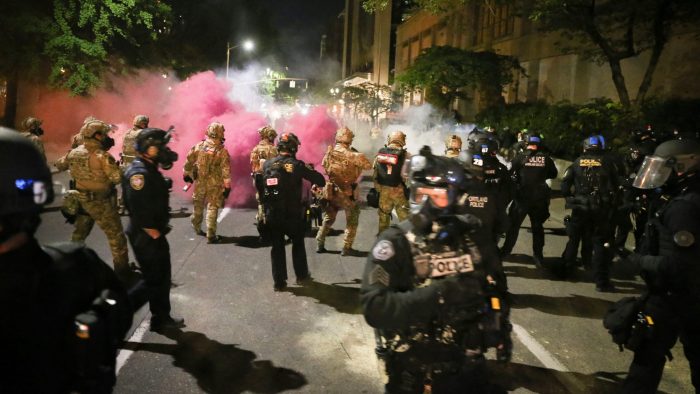 President Trump on Monday urged Portland to “bring in” the National Guard, after months of unrest, calling the city “out of control,” and warning local officials that they will “be held responsible,” Fox News reports.

He added: “The Guard is ready to act immediately. The Courthouse is secured by Homeland!”

Trump’s tweets come after a riot was declared in Portland, Ore., on Sunday evening, as officers tried to quell unrest that saw protesters march on a police union building, throw objects at officers, block a road, and set dumpster fires, according to reports.

Portland, which is out of control, should finally, after almost 3 months, bring in the National Guard. The Mayor and Governor are putting people’s lives at risk. They will be held responsible. The Guard is ready to act immediately. The Courthouse is secured by Homeland!

Trump’s comments come after Portland declared riots on Sunday evening, as officers tried to slow the unrest that saw protesters march on a police union building, throw objects at officers, block a road, and set dumpster fires, according to reports.

While demonstrators were being dispersed, commercial-grade fireworks were thrown at officers, injuring two, police said.

The president has been denouncing the violent demonstrations in Portland for weeks, and his administration deployed federal agents, including the U.S. Marshals Special Operations Group and a U.S. Customs and Border Protection team based on the U.S.-Mexico border, to protect federal property.

For now, there does not seem to be any signs of peaceful protests or any signs that the Mayor will request the Governor to activate the National Guard to roll into Portland to put an end to the riots.

Rush Limbaugh Explains How Impeachment Is GREAT For President Trump