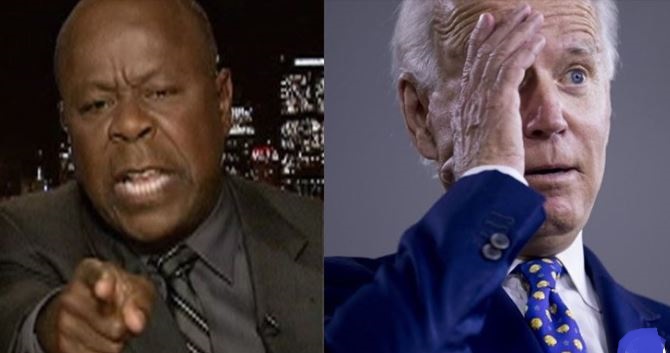 This comes barely a week after Biden said this…

“If you have a problem figuring out whether you’re for me or Trump, then you ain’t black.”

And only days after saying this…

BIDEN: “No, I haven’t taken a test. Why the hell would I take a test? C’mon man. That’s like saying you, before you got in this program, if you take a test where you’re taking cocaine or not, what do you think huh? Are you a junkie?”

BIDEN: "No, I haven't taken a test. Why the hell would I take a test? C'mon man. That's like saying you, before you got in this program, if you take a test where you're taking cocaine or not, what do you think huh? Are you a junkie?" pic.twitter.com/f6UMPJq381

As if all blacks are junkies…

Terrell made these comments while a guest of Sean Hannity’s last night.

Here’s a video of the full segment…

“He has been lying about his civil rights record for decades.

“He lied and said he got arrested for trying to visit Nelson Mandela.

“And, for decades he said that he has participated in desegregating restaurants and movie theaters in Delaware. Zero evidence. The New York Times looked at it and said, years ago, that his advisors gently remind Joe to stop saying it because it wasn’t true.

Terrell: “I’ve been a trial lawyer for the past thirty years. With all the evidence you have played in front of your viewers about Joe Biden’s racist past, I can try Joe Biden in a courtroom and convict him of being a racist.”

Joe Biden is a racist.

Michelle Obama Says “White America” Is RACIST, “When I’ve been completely incognito during the eight years in the White House, walking the dogs on the canal, people will come up and pet my dogs, but will not look me in the eye.”

New CBS Poll Out And Biden Is Shaking In His Boots