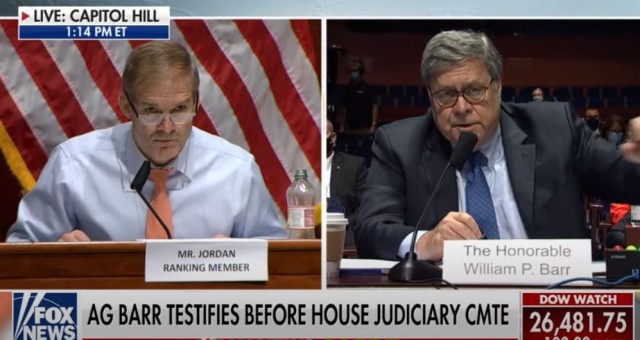 Earlier we reported on how the great Jim Jordan ripped Jerry ‘The Penguin’ Nadler to pieces during Attorney General Bill Barr’s testimony before the House Judiciary Committee.

Jordan was on fire and touched on a variety of subjects and had several run-ins with Nadler throughout the course of the day.

Nadler was a complete d-bag as usual as were all of the Commiekrats.

JORDAN: “I was — the video we played, it’s hard to watch. It was really hard to watch, to see that happening in our great country.

But the start of it was almost laughable, where you have the reporter saying, as a building is burning behind him, it’s not, generally speaking, an unruly protest, it’s mostly just a protest.

I mean, it’s almost laughable, when you have that reporter saying — I guess — I guess, he is saying, ‘It’s not a fire, it’s us a burning building.’

I guess he is saying it’s a peaceful burning building.”

As the hearing was winding down, Barr asked Chairman Jerry Nadler, D-N.Y., if the committee could break for five minutes so he could get something to eat for lunch.

Nadler’s response was a firm no.

Barr retorted: “I waited 45 minutes, an hour for you this morning. I haven’t had lunch. I’d like to take a five minute break.”

Barr was referring to the delay in the start of the hearing after Nadler was involved in a car accident on his way to Capitol Hill.

Nadler responded that the hearing is set to be over in “a few minutes.”

As ranking member Jim Jordan, R-Ohio, stepped in to defend Barr, Nadler slammed down his gavel and allowed the committee to take a short break before questioning resumed.

It was quite the spectacle to say the least.

The dems should be ashamed.

They showed their true colors and those colors aren’t RED, WHITE and BLUE!

Feel free to leave a comment and let us know what you think!

Making Excuses, Nadler Says Fairness Of 2020 Election In Doubt If Trump Is Not Removed

Who Do They Think That They Are Talking To?
January 15th, 2021 Sons of Liberty Media

Florida Congressman Calls Democrats out on their Hypocrisy
January 15th, 2021 The Real Side With Joe Messina