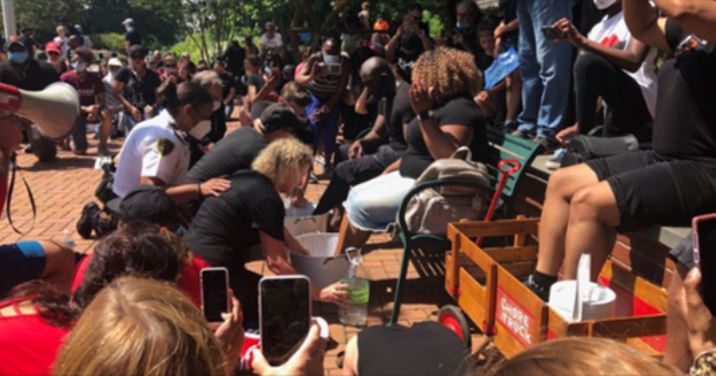 Cary, North Carolina was the scene of some serious race shaming where white protesters washed the feet of black protest organizers.

White liberals were kneeling, and now they are washing the feet of the black protest organizers.

One more step closer to the chambers of the final soulution. The Nazis would have loved this submission. pic.twitter.com/t5sQdYanrV

This was never about color. The people above are being used as pawns in a bigger plan of anarchy, and the thugs in the video below are taking advantage of the situation.

Euclid Ohio….Was never about color it’s planned Anarchy. These are animals & they deserve the harshest punishment under the law! @POTUS pic.twitter.com/xmFUX64HGa

Nothing says black lives matter more than robbing a jewelry store during a “Justice for George” riot:

Now this is some robbery!! And takes the violence in US to next levels…

Gangs looting top gun shops in various parts of US. Soon, these guns will be deployed against the armed forces and police. !
Martial law will follow soon…!
It's going to escalate not calm down! pic.twitter.com/xAKVmdZrHF

Even more proof that this has nothing to do with black lives. Mitt Romney is marching with a group of “Christians” to the White House right now. Does anyone believe for a second that this is anything more than a jab at President Trump?

.@SenatorRomney marching in front of the WH: “We need a voice against racism, we need many voices against racism and against brutality. And we need to stand up and say black lives matter.” (w/ @alivitali) pic.twitter.com/rGrXvM6wty

*Some additional material was added to original article.

How did Black Friday get it’s name? It’s not what you think. Racist?
November 27th, 2020 The Real Side With Joe Messina