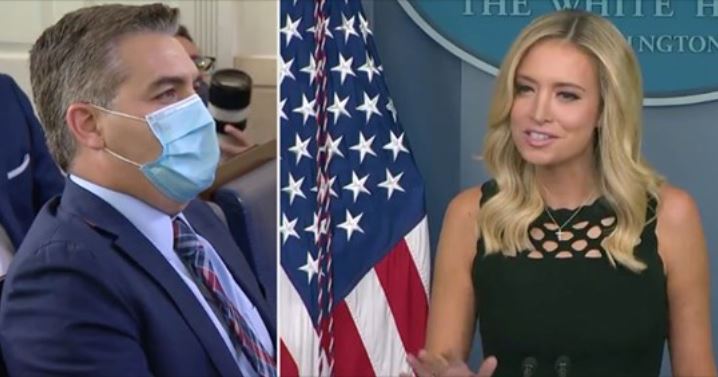 CNN’s Jim Acosta is one of the most hostile members of the anti-Trump White House press pool. When Sarah Sanders was President Trump’s press secretary, the American public appreciated how she regularly responded in kind to the unhinged mouthpiece for the Democrat Party.

Like her predecessor, White House Press Secretary Kayleigh McEnany welcomes Acosta’s attacks on the president and his administration. Instead of shying away from his attacks, the petite White House press secretary who punches well above her weight class reliably delivers a knock out blow to the feckless media agitators who repeatedly question the tactics employed by President Trump in his war to save America from the left.

Acosta began his series of questions by asking if Kayleigh and other White House officials will be wearing a mask? When McEnany responded that she would not be wearing a mask, the disrespectful reporter asked her if she was making a “personal political statement,” by not wearing a mask or if her boss, President Trump, would be “disappointed” in her for wearing a mask?

Next up, was a question from the CNN hack reporter about a hilarious video President Trump tweeted that was made by the well-known conservative, satirical, meme maker, Carpe Donktum.

“Gotta let me finish Jim, this isn’t a cable network segment, I’m answering your question right now from the White House podium,” McEnany told the hostile CNN reporter as he repeatedly attempted to interrupt her while she cited multiple examples of fake news CNN regularly shares on their network.

CNN's Jim Acosta claims Pres. Trump was "exploiting children to make some sort of crass political point" by sharing the satirical video of his network.

Press Secretary Kayleigh McEnany: "He was making a point about CNN specifically."pic.twitter.com/J5rJySiHSB

Here’s the Carpe Donktum video President Trump tweeted last night that points out how CNN manipulates the news to influence their viewers and intentionally create unrest in America. As part of their censorship efforts against the President of the United States, the video was flagged by the far-left Twitter as “manipulated media.”

Instead of questioning President Trump’s motives for sharing a video created specifically to make a point about how CNN manipulates the news, Americans should all question CNN’s intent when they use fake news to sow hatred and push for unrest in America. Does CNN, the far-left, low-ratings cable news network, regularly distort the news so they can blame President Trump for the unrest? What’s their end-game?