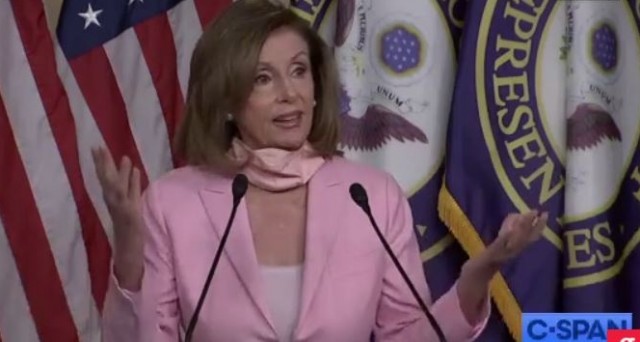 Speaker of the House Nancy Pelosi wants to erase history by removing portraits of past Speakers of the House who later served in the Confederacy from public display in the U.S. Capitol.

Pelosi sent a letter to Clerk of the House of Representatives:

“Tomorrow, Americans will mark Juneteenth, a beautiful and proud celebration of freedom for African Americans. Very sadly, this day comes during a moment of extraordinary national anguish, as we grieve for the hundreds of Black Americans killed by racial injustice and police brutality, including George Floyd, Breonna Taylor, Ahmaud Arbery and so many others.”

“Tomorrow is Juneteenth, a day that we have observed as a day of freedom in our country, a day that people in the West found out about the Emancipation Proclamation.

In observance of that I’ve sent a letter — you will see — to the clerk of the House directing the clerk to remove the portraits of four previous speakers of the House who served in the Confederacy.

We didn’t know about this until we were taking inventory of the statues and the curator told us that there were four paintings of speakers in the Capitol of the United States, four speakers who had served in a Confederacy.

So tomorrow, Juneteenth, the clerk will oversee the removal of those Confederate speakers from the House.

As I’ve said before there’s no room in the halls of this democracy, this temple of democracy to memorialize people who embody violent bigotry and grotesque racism of the Confederacy.

You have to see the remarks that they had made and how oblivious they were to what our Founders had in mind in our country.

We must lead by example.”

This country is being divided more and more each and every day by the left.

These Democrats are totally out of control.

Lt. Col. Allen West Suggests Nancy Pelosi Should Be Heading To Prison For What She Did

WATCH: Did Pelosi Just Confess To Spying On Trump On 60 Mins? US Rep. Liz Cheney- “This Is Starting To Look Like A Political Set Up” [Opinion]