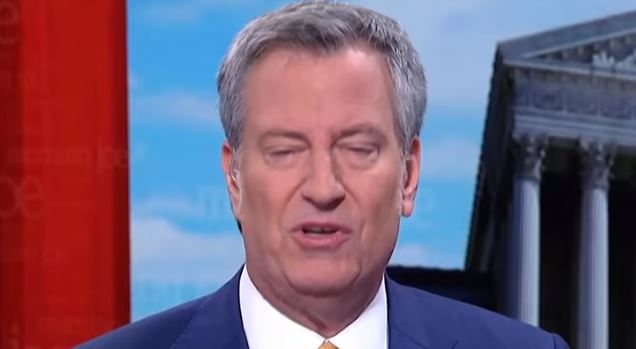 New York City Mayor Bill de Blasio’s wife, Chirlane McCray, can’t seem to account for the mass sum of money, which was intended to go toward the city’s Thrive program, designed to aid those with mental health issues. McCray oversees the program.

David Harris Jr.’s website reports that this “money cannot be accounted for and Thrive keeps few records on their accomplishments or their spending, making it impossible to locate the money. 850 Million dollars is nothing to sneeze at. No one is saying she took any money, but it does show she failed to provide oversight on the program. To make matters worse, they don’t even know if the program was successful or not.”

Where has $850m gone? Bill de Blasio’s wife can’t account for staggering amount of taxpayer money that the NY Mayor gave her for mental health project

Bill de Blasio’s wife Chirlane McCray cannot explain where $850 million given to the mental health program she champions has gone, according to reports.

In the three years it has been running, organizers at ThriveNYC have largely failed to keep records of the initiative’s achievements – and data that has been collected shows it lagging well behind targets.

The program was approved for a larger budge continuing forward, with it projected to spend $1 billion within the next five years.

A Politico report stated that the people taking part in the scheme did not realize how much spending it would actually involve.

“Thrive said it has developed a list of 417 metrics to measure how effective the program is moving forward, but asked to assess its impact so far, Politico said the data was piecemeal and showed a largely failing picture,” the Daily Mail reports.

We’re left with the question as to how someone is able to lose nearly a billion dollars.

POLITICO spoke to more than 16 people, including elected officials, advocates, representatives of community organizations, researchers and consultants who said that although it is crucial for the city to invest in mental health resources, they did not know whether Thrive was successful and said the city has an obligation to publicize its numbers and how it compares to the goals it set out to accomplish. Some requested anonymity for fear of retaliation while others were more vocal in their critiques.

Run by the mayor’s wife and closest adviser, Chirlane McCray, ThriveNYC sought to tackle issues like substance use, depression and suicide. It is meant to target low-income individuals who are often priced out of mental health care because those services are typically not covered by insurance. Thrive also is meant to focus on communities — African Americans, Latinos, military veterans — who are less likely to seek care for mental health problems…

The City Hall budget shows $594 million in spending since ThriveNYC’s inception. The IBO budget shows $816 million. Both City Hall and IBO suspect the Office of Management and Budget included fewer programs in the City Hall version, accounting for the difference. But the budget discrepancies illustrate the difficulty in tracking Thrive.