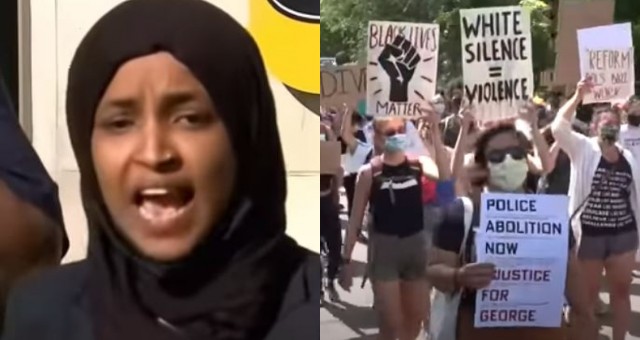 By RUSTY WEISS at MENREC–

Congresswoman Ilhan Omar spoke at an anti-law enforcement rally in Minneapolis this weekend and demanded the police department be ‘completely dismantled,’ comparing it to cancer that needs to be cut out.

“I will never cosign on funding a police department that continues to brutalize us, and I will never stop saying not only do we need to dis-invest in police, but we need to completely dismantle the Minneapolis Police Department,” she said to cheers.

Omar (D-MN) went on to label the entire department as “rotten to the root.”

“When somebody gets a cancer and that cancer starts to spread throughout their body and you know the root of that cancer is the leg, people say to the family of that person, ‘We have to amputate this leg in order for that cancer not to spread and kill that person,’” she continued.

Numerous celebrities and lawmakers have called on police departments nationwide to be defunded in the wake of a handful of rogue police officers horrifically killing George Floyd.

Trending: Seattle Radio Host Who Claims Protests Are Not Violent Does 180 After They Torch His Very Own Home

Think about that – they’ve been simultaneously celebrating rioters and arsonists while wanting to see law enforcement ripped apart. It’s about as lawless a notion as anybody could possibly promote.

Omar, however, is taking a much further step in calling for the Minneapolis police department to be completely abolished.

“So today we are saying we don’t want your damn reforms, we don’t want the slow dying of our communities to continue,” she incited. ” What we want you to do is to cut the cancer so that it does not continue to spread throughout our bodies.”

The only cancer currently infecting the United States of America are radical, anti-law and order lawmakers.

The Minneapolis Police Department has proven themselves beyond reform.

It’s time to disband them and reimagine public safety in Minneapolis.

Thank you to @MplsWard3 for your leadership on this! https://t.co/AQfHM5M6eR

Late last week, Rep. Omar called for the Minneapolis Police Department to be shut down because they had “proven themselves beyond reform.”

She appears to have gotten her wish on Sunday when nine members of the Minneapolis City Council – a veto-proof majority – publicly announced their intention to abolish the department.

“This is dangerous, counterproductive, and deeply irrational,” Crenshaw tweeted. “‘Defund the police’ is not a call from the fringes of the far left anymore. It has gone from a radical slogan to actual policy in a major American city, within days.”

This radical pro-criminal sentiment currently seeping into the minds of our leaders must be stopped.

Read more at the Political Insider

This article originally appeared at The Mental Recession and was republished with permission.

*This article may not be reprinted without expressed permission from The Mental Recession.