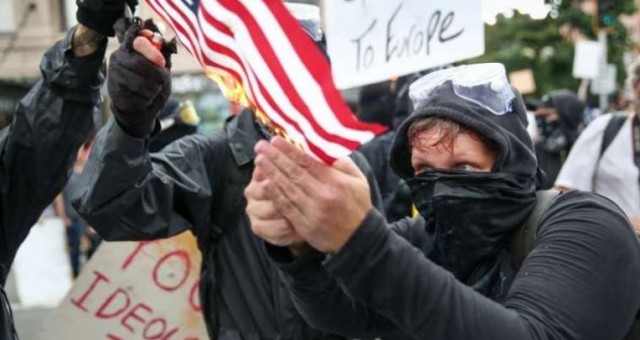 Regardless of someone’s political beliefs, as a society we’ve got to have some basic rules of behavior that cannot be crossed, ever.

That includes victimizing someone who is disabled.

The American Left claims to have cornered the market on “compassion,” but in example after example we see that these people are nothing but liars and cowards.

Like the Antifa so-and-so who stole a bottle of water from a disabled person recently and then poured it on him because…#resistance or something.

Since we don’t know the origin of the video, we can’t say for certain that the gentleman in the wheelchair is indeed a disabled veteran.

But no matter. He certainly appears to be disabled. And that means he’s completely off-limits to physical abuse by people who aren’t disabled.

Like that Antifa coward who stole his bottle of water and then poured it over him.

Notice how these brave revolutionaries always travel in packs — screaming obscenities at people and labeling them as this or that without it ever dawning on them what gigantic hypocrites they are.

America has suffered through political unrest in the past but this time it feels different. It feels like it probably did in the 1850s, the decade preceding the deadliest conflict in the history of our country — our own Civil War.

Even Leftist comedian Bill Maher believes we, as a nation, are on the cusp of something terrible if we don’t stop hating each other and behaving the way the cowards in the video above are behaving.

We hate to agree with anything Bill Maher says, but he’s probably right.

Civil wars don’t just ‘break out.’ They occur following some event, some spark, and only after years of increased political tensions between rival factions who eventually figure out there is no other way to settle differences.

And we’ve already experienced years of political tension. Recall that conservatives’ disdain for Barack Obama was visceral and palpable.

But recall as well that we never saw videos go viral of Right-leaning Americans pouring water over defenseless disabled persons. That’s new to the Trump era, and it’s primarily the Left that is responsible for such disgusting behavior.

All while claiming that Trump supporters are disgusting.

This is how societies break down: When one segment feels they are no longer bound by the rules of civility that must be inherent in every culture, every society, lest they be consumed by violence and self-destruct.

We can’t abide this kind of behavior. Not if we hope to survive ‘the troubles.’

BREAKING: Seattle Washington’s Capitol Hill Has Fallen To Antifa Domestic Terrorists After Reports That They Have Taken Over 6 Square Block Section of The City, Set Up Security Watch & Called for Armed Volunteers [Opinion]

BREAKING: Van Plows Through Crowd, 1 Dead So Far- Here’s What We Know