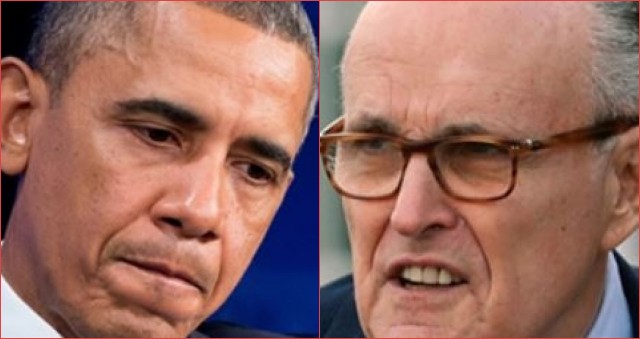 Opinion| Lawrence David| Rudolph (Rudy) Giuliani is best known as the mayor who made New York City livable again and led its residents through the 9/11 terror attacks.  Rudy received accolades for his leadership during a time of great chaos and unknowns.

But Rudy’s resume is significantly greater than that.

Trending: Black Lives Matter Set Up Protest In Front Of Prominent Los Angeles Govt. Official’s House, That’s When Her Husband Whips Out Gun And Says, “I Don’t Care Who You Are, Get Off Of My Porch, Right Now”

Giuliani was a federal prosecutor who led the effort to dismantle the “Five Families” of New York. Working with Italian prosecutors and police, Rudy constructed a bulletproof case against the mafia.

Giuliani now serves as President Trump’s personal attorney. As the president’s legal representative he traveled to Ukraine to better understand the charges that had been brought against his client.

What he uncovered is a devastating indictment of Obama’s Vice President Joe Biden, Obama’s Secretary of State Hillary Clinton, and the entire Obama administration.

With the U.S. media aligned to protect those Globalists guilty of corruption, Mr. Giuliani decided to get the message out using a podcast called Common Sense.

Highlights from Giuliani’s podcast in his own words follow:

“It was our embassy that was encouraging the waste of American money.”

Those nihilistic entities are what our tax dollars were funding.

Rudy unloads on the corrupt Americans assigned to the American embassy in Ukraine who were protecting the Obama administration’s complicity from being exposed.

He unloads on the Bidens not just on Ukraine but in Iraq and in China.

Forty-five million population, struggling with economic pressure from Russia, and in 2014 it had only $800,000 in the bank.”

“The Clinton Foundation alone might qualify for [the most corrupt organization.]”

Prediction… There is going to be much more damning information that comes to light over the next few months that is going to crush the Democrats’ 2020 hopes.

BREAKING: Trump Calls On Congress To Have Obama TESTIFY

Finally! Motion Drafted to Subpoena Adam Schiff, the ‘Whistleblower’ & the Bidens to Testify

HCQ ‘study,’ retracted this week, was absurdly suspect from the beginning – yet got WHO clinical trials shut down
June 6th, 2020 Liberty Unyielding