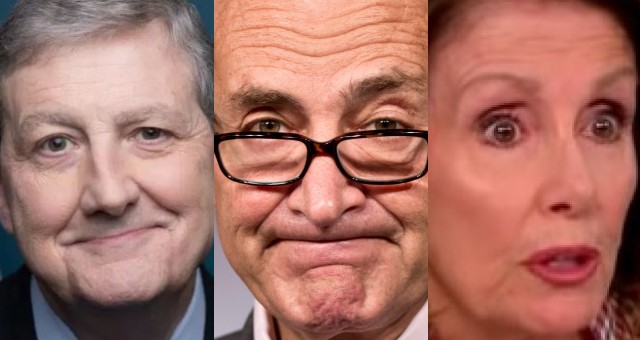 One of my favorite Senators, John Kennedy (Louisiana) spoke with Fox News Maria Bartiromo and completely shredded Pelosi and Schumer for their “wildly irresponsible” delay in additional funding for the PPP for the sole purpose of funding their pet political projects at the expense of providing the vital relief that Americans desperately need right now. Most Americans live paycheck to paycheck and they need this money TODAY!

PELOSI AND SCHUMER ARE FILTHY SCUMBAGS WHO DON’T GIVE A RAT’S ASS ABOUT YOU. THEY ARE FREAKING CRIMINALS IN MY OPINION.

*See the video below!

BARTIROMO: “Yeah, I know, I think you make really good point about the visas not being done anyway. I want to ask about reopening the country, but let me first start about the Senate just hours away from voting on phase 3.5 of the coronavirus relief, including funding to restock paycheck protection program. That $470 billion package would allocate $310 billion for small business. The original allotment of small business funding running out of money in just a matter of days. Senator, what is your take on this? Is this what you are expecting to vote on and will you vote today?”

KENNEDY: “I hope we will vote today. I think the delay caused by Speaker Pelosi and Senator Schumer has been wildly irresponsible. We’re going to do some extra things in the bill besides supplementing what I call the small business forgivable loan program, but those aren’t emergencies. The — the PPP program is an emergency, we should have done it last Thursday before it ran out of money. I — I just am very disappointed we had a week’s delay. There was no reason for it other than political posturing and now is not the time. This is not the time.”

BARTIROMO: “What are you hearing from your colleagues? What is Nancy Pelosi saying about this? Because I will tell you, even while you and colleagues are saying that, you know, she is holding things up, she is going on TV shows all weekend, this weekend, saying it is Donald Trump’s fault. You know that?”

KENNEDY: “Yeah. Well, look, I have been around politics my whole life. I understand the mystery and the muscle of politics. But there is — I worry the Speaker sees this as a political opportunity. She needs to stop thinking about the next election. Start thinking about next generation. I will give her this, she is consistent. Whatever Trump wants, she is against. And this is no time for that. The PPP program is working. And to let it run out of money for a week to hurt the people, the employees and the small businesses, is — let me say it again, it’s wildly irresponsible and this just isn’t a time for that. Now I have been hearing some —“

BARTIROMO: “What evidence — go ahead.

KENNEDY: “I was saying I have been here since Sunday we’re ready to vote on this thing. This is par for the course we reached a deal, sometime not always but my democratic friends want to they want to trade in the last second they let president announce something then start adding stuff, we just don’t have time for this silly nonsense right now.”

BARTIROMO: “So is that what it is I mean that they keep adding what evidence can you share with us that shows that Nancy Pelosi and her colleagues are sitting on this for political reasons? I know that in the last two weeks when you were first doing the cares act she wanted to put funding for planned Parenthood there you colleagues agreed to send 25 million dollars to Kennedy center for cares act she got that in what else is going on you can share with us in terms of approving to us that she is not telling the truth that it is you and your colleagues and the president’s fault?”

I don’t know that we are going to have a vote today. In the Senate it is going to have to be unanimous otherwise come back I plan on doing I worry I don’t want to accuse anybody unfairly but this is vintage Pelosi waits until last minute then goes there’s one more thing I get it she has a social agenda I get tilt elites in Washington and new York think they are smarter he more virtuous than the rest of us but this is no time for that the American people they are either dying from coronavirus, sick from it or dying from not having a job.

VOTE RED ALL ACROSS THE BOARD!

Democrats Confess: Admit To CNN’s Jake Tapper That “Trump Won”, Played Pelosi And The Fraud Squad Like A Fiddle

Bolton Sticks It To Schiff and Pelosi, Won’t Testify in House Impeachment Inquiries