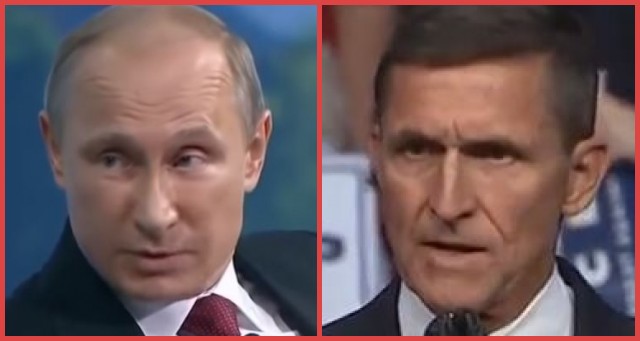 The ‘Russian collusion’ hoax has been debunked time and again by Congress, multiple media outlets, Robert Mueller, and the evidence. But the Democrat Party hacks over at MSNBC who disguise themselves as journalists just won’t let it go.

And really, when you think about it, that makes sense. The little-watched network is wholly invested in the hoax because its hosts pushed it for years, despite evidence to the contrary.

So it only makes sense that the dummies there would push the claim that Vladimir Putin is behind Attorney General William Barr’s decision to drop the Justice Department’s case against President Donald Trump’s first national security adviser, retired Lt. Gen. Michael Flynn.

Not because the evidence unearthed and released by the DoJ earlier this month proved beyond a shadow of a doubt that President Obama’s FBI set up Flynn.

FBI agents, in handwritten notes, questioned what the goal was of their January 24, 2017 interview with Flynn, writing: “What is our goal? Truth/Admission or to get him to lie, so we can prosecute him or get him fired?”

Former FBI Deputy Director Andrew McCabe (fired for lying to the FBI) would later say the interview with Flynn was “very odd” because “it seemed like [Flynn] was telling the truth.”

But even though Flynn appears to have been vindicated and the victim of FBI entrapment, MSNBC host Andrea Mitchell had a different take: That Russian President Vladimir Putin was behind the DOJ’s charges being dropped.

If you have speculated that Mitchell’s shelf life as a journalist expired long ago, you are 100% correct.

As Newsbusters reported, Mitchell was interviewing former FBI Assistant Director for Counterintelligence and current MSNBC contributor Frank Figliuzzi about the charges against Flynn being dropped.

Mitchell claimed the decision to drop the charges was “stunning” and “unprecedented,” which is actually true, but she doesn’t think that for the reasons she should: Flynn was set up.

No, she believes the decision to exonerate him was the set-up, and Vlad Putin is the dude behind it. Because Russia.

Frank, first, all of the implications here, and the fact that he then called Vladimir Putin yesterday, and according to the White House announcement of this and description of it, there was no mention of the Russia probe and the election probe. But the president himself discussed that with Vladimir Putin, and the facts that in his view now that the Russian hoax was dispelled, they could get back to business,” Mitchell said, according to Newsbusters.

Figliuzzi was all too happy to agree that Putin was behind the DOJ’s decision.

“Yeah, I think they’re actually linked. The dismissal of charges against Flynn and conversation by the president with Vladimir Putin, stone-cold adversary of the United States on the very same day, that’s not a coincidence,” Figliuzzi said.

This brainiac then went on to claim that the investigation into Flynn was important for national security.

“The Flynn interview that is at issue here by the FBI was all about resolving the question of whether Mike Flynn was a counterintelligence threat to the nation as he entered into the national security adviser role. It was about figuring out how to neutralize, resolve and counter that threat. So when the president gets on the phone with Vladimir Putin and the topic comes up in the same conversation, the concerns have not yet been resolved,” he said.

Yes, they have been resolved. Flynn didn’t do anything; Flynn was the victim.

Here’s another thing. While Trump’s phone call with Putin occurred the same day the charges were dropped, U.S. Attorney Jeff Jensen of Missouri recommended those charges be dropped a week earlier.

And finally, what’s the deal with Trump talking to Putin anyway? It’s like the Democrats want there to be a war Russia, which still has a hell of a lot of nuclear weapons, in case anyone’s forgotten.

Michael Flynn’s Lawyer Sydney Powell Writes Blistering Open Letter To Obama: “The Only Crimes Here Were By Your Alumni In The FBI, White House, Intelligence Community, And Justice Department”