Lawrence David| Opinion| Lt. General Michael Flynn has endured more than three years of living hell and personal bankruptcy at the hands of corrupt FBI agents intent on bringing him down.

That is likely to be confirmed this week, perhaps as early as today, when Judge Emmet Sullivan is expected to unseal proof that the FBI coerced a guilty plea out of Flynn to end his ties with the Trump campaign where he could expose Obama’s malfeasance.

At the core of this is the government’s refusal to hand over Brady material… exculpatory evidence that would prove prosecutors knew Flynn was innocent but proceeded to turn the screws in order to get a plea. Why?

Despite reports of lead agent Peter Strzok’s bias, it’s unlikely the agents – Strzok and Joe Pientka – who targeted Gen. Flynn were acting fueled solely by their own bias.

In a Dec. 2018 PJ Media article written by Debra Heine she explained:

What was Flynn’s real sin?

As the director of the Defense Intelligence Agency (DIA) from July 2012 until he was forced out in August 2014, he clashed mightily with the Obama administration’s policies on ISIS and the Iran nuclear deal, among other things. As a result, the decorated general put himself “on the wrong side of history” and at odds with the Obama-friendly deep state.

The outspoken general continued to rock the boat after he left the administration.

For instance, in November 2015 during an appearance on Fox News, Flynn called for an investigation into the ISIS intel-skewing scandal, recommending that it “start right at the top.”

“Where intelligence starts and stops is at the White House,” Flynn said. “The president sets the priorities and he’s the number one customer. So if he’s not getting the intelligence that he needs and he’s not paying attention to what else is going on, then something else is going wrong between him and the advisers that he has.”

Obama already despised Flynn. But his hate likely turned to fear when his former DIA decided to throw his support behind Donald J. Trump, another boat-rocker who had a real chance of winning.

Remember Obama made a point after the 2016 election of advising Trump to avoid hiring the highly decorated general.

“… Michael Flynn’s meeting at the White House with the FBI was a complete setup… He never lied… it’s all in Mr. Baker’s notes, that’s the exculpatory evidence.”

#Flynn files #Bombshell motions today: to dismiss for egregious government misconduct and detailing the #ConflictOfInterest
by #Covington that tainted his plea and all proceedings with constitutional error. @BarbaraRedgate@JosephJFlynn1@GoJackFlynnhttps://t.co/Nw20OVogiA 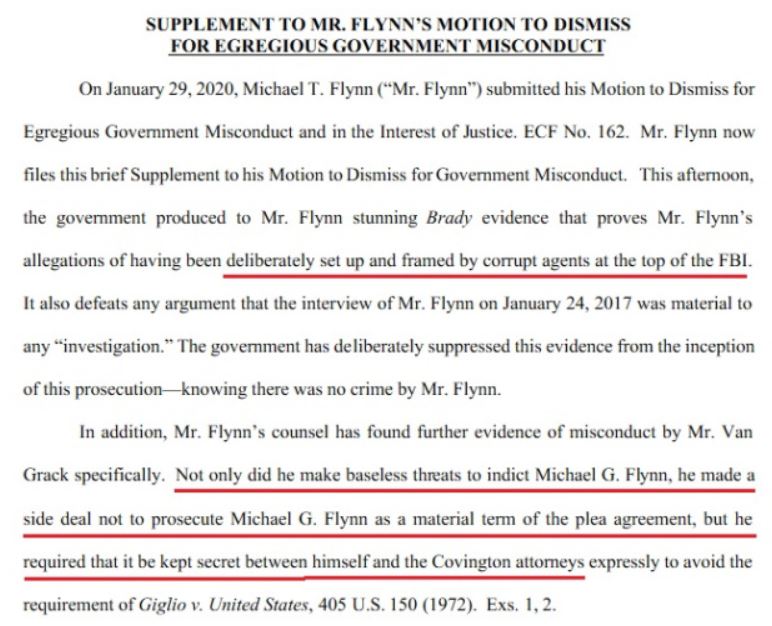 Just In: Man Who Blew The Whistle On Obama Admin Found Shot To Death Outside His Car, According To Reports