In an amazing and unprecedented move, at least in my lifetime, the entire San Franscisco Bay Area has been ordered into mandatory lockdown.

Residents have been told to shelter at home for three weeks and all “non-essential” businesses ordered closed.

Trending: BREAKING: Former Comedian Kathy Griffin Doubles Down… Admits She Advocated For Someone To Kill Trump On Twitter

Via the San Francisco Examiner:

With the coronavirus pandemic rapidly spreading throughout communities around the nation, city leaders are taking the unprecedented step of placing San Francisco on lockdown for three weeks beginning Tuesday at midnight.

The City will legally prohibit residents from leaving their homes except to meet basic needs including visiting the doctor, or buying groceries or medicine, until at least April 7, Mayor London Breed announced Monday.

The dramatic restrictions, imposed under a city-issued Public Health Order, will also require non-essential businesses like bars and gyms to close. But pharmacies, banks and other businesses that perform an “essential” role for society will be allowed to remain open.

In a statement ahead of a City Hall press conference with city officials, Breed urged the public to remain calm and emphasized “that all essential needs will continue to be met.”

“This is going to be a defining moment for our city,” Breed said. “We all have a responsibility to do our part to protect our neighbors and slow the spread of this virus by staying at home unless it is absolutely essential to go outside.”

In a joint statement, Sen. Scott Wiener and assemblymembers Phil Ting and David Chiu called the orders a “critical step to combat the pandemic.”

“We are in unprecedented times,” the state officials said. “We know that people are hurting, financially and otherwise. This short-term pain will help us avoid much more severe long-term consequences.”

This is a stunning development and would have been considered unthinkable a few short weeks ago.

We’ll update this story as we know more.

Thanks to our good friends at The Federalist Papers for permission to republish this material.

This is the Problem: Good Cop Fired for Asking Fellow Cops to Respect the Rights of the People
May 27th, 2020 DC Clothesline 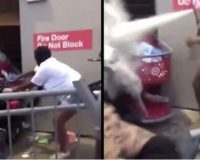 Israel to Annex Parts of West Bank – War Between Israel and the Palestinians, Hezbollah, Hamas & Jordan About to Begin?
May 28th, 2020 TCP News