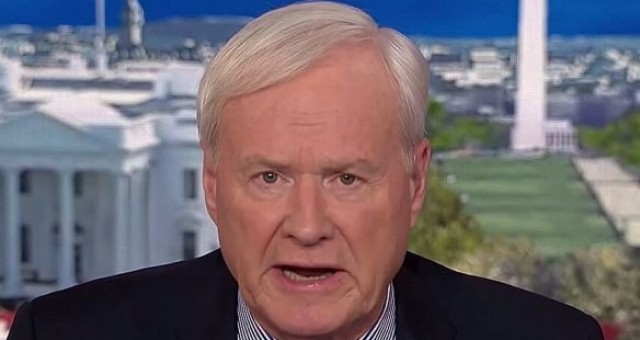 Chris “I felt this thrill going up my leg” Matthews, the liberal hack from MSNBC is calling it quits!

That’s right folks, no more BS from Matthews on his crappy show ‘Hardball.’

Check the video out!

“Let me start with my headline tonight- I’m retiring. This is the last ‘Hardball’ on MSNBC,” Matthews said. “And obviously, this isn’t for the lack of interest in politics. As you can tell, I loved every minute of my 20 years as host of ‘Hardball.’ Every morning I read the papers and I’m gung-ho to get to work.”

“Not many people have had this privilege. I loved working with my producers and our discussions we’d have on how we report the news. And I love having this connection with you, the people who watch.”

“After conversations with NBC, I decided tonight will be my last ‘Hardball.’ So let me tell you why. The younger generations out there are ready to take the reigns. We see them in politics, in the media, and fighting for their causes.”

The longtime MSNBC host then referenced to the renewed sexual harassment claims made against him by a journalist who previously appeared on his show.

“Compliments on a woman’s appearance that some men, including me, might have once incorrectly thought were okay were not okay, not then and certainly not today. And for making such comments in the past, I’m sorry,” Matthews said.

What- now we aren’t allowed to compliment a woman’s appearance? What a joke.

Matthews is coming off a disastrous week filled with gaffes, controversial moments and accusations of sexist behavior – but a former reporter who detailed similar allegations against the “Hardball” host years ago thinks the criticism is only reaching critical mass now because the timing is convenient for liberals.

Last month, the host was heavily criticized for comparing Sen. Bernie Sanders’ victory in the Nevada caucuses to the Nazi conquest of France in 1940. He later apologized for those remarks.

Spectator USA Washington editor Amber Athey covered sexual harassment claims against Matthews back in 2017 at the height of the #MeToo era but the “Hardball” host managed to stick around despite her report that NBC paid an assistant producer $40,000 in 1999 to settle her sexual harassment claim against the anchor.

“This was a long time coming and I’m sure the many women who spoke to me, either on background or off the record, about their experiences with Chris Matthews feel very vindicated right now,” Athey told Fox News.

Smell ya later you liberal HACK!

How to make sure the 2020 election never happens again
December 5th, 2020 Liberty Unyielding

Fats: The Good, The Bad & The Ugly & The New Vaccines With Kate Shemirani
December 5th, 2020 Sons of Liberty Media