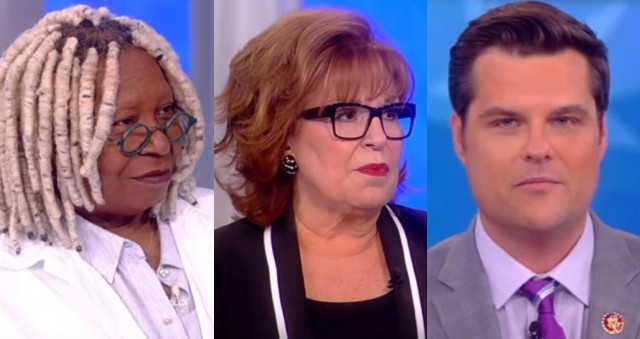 Opinion| HJIC – The fact that there is a market for ‘The View’ makes me sad inside.

A bunch of out of touch, rich, authoritarian sympathizers, spreading lies and nonsense about President Trump and conservatives, day in and day out tearing our institutions down is not something I would choose to waste my time watching.

However, there are enough people who do tune in to make the show a force to be reckoned with when it comes to ratings and influence.

If there is one good thing that I can say about the show is that they do have some well spoken patriots to defend our point of view … even if they are battling 4 or so rabid commies while they speak.

The ‘Trumpiest’ Congressman in DC, Matt Gaetz, a Republican from Florida joined the ladies of the View this week.

‘Right out of the gate Matt went after the death of the Democrat Party last night during their raucous debate.
They didn’t know what to do with him.

Interesting to see Meghan McCain jump in only to bash Roger Stone.

Meghan McCain then claimed she was a conservative.
What a joke.’

The fundamental premise of the Biden Campaign is that he is electable and he can't seem to win elections.

I’ve had the pleasure of meeting Mr. Gaetz before and he is as witty and clever as he seemed on the show. I expect to see some big things from this Congressman as time goes on.

Rick Grenell Claims ‘She’ Will Be Shadow President … And He Did NOT Mean Kamala
January 18th, 2021 The Lid