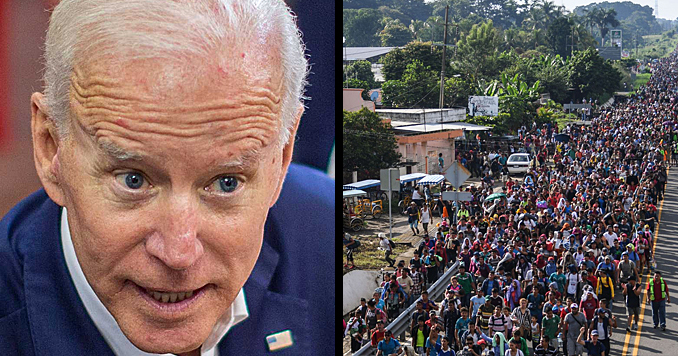 Joe Biden wants to add in more protections for illegal immigrants.  Oh, and he’s realigning and changing the very definition of what is a felony.

Former Vice President Joe Biden (D) says “nobody will be deported” from the United States until they commit a felony under his proposed national immigration plan, Law Enforcement Today reports.

During a campaign rally in Reno, Nevada on Monday, Biden promised that if elected president, illegal aliens will only ever be deported if they commit a felony.

Previously, Biden has said he does not consider drunk driving a felony, thus convicted illegal alien drunk drivers can expect not to be deported.

Biden also touted his plan to provide a route to American citizenship for the nation’s entire illegal alien population, which stands at an estimated 11 to 22 million foreign nationals. Biden claimed the massive amnesty is necessary to keep Social Security solvent. Biden said:

“Look, here’s the deal, think about this: One of the things I’m going to do … and begin to implement it between now and the time that I get sworn in, we have now 24 out of every 100 students in school today is a Latino — 24 out of 100. Twenty-four.

We’re in a situation as well where we find that we have a population of people who have been here, over 11 million people, and they’re not all Latino, they’re Asian, they’re African, across the board. And in fact, I’m going to lay down a detailed … a pathway to citizenship that’s earned and make sure that everybody is able to get into that pathway.”

Deporting every illegal alien in the country would amount to a cost savings of about $622 billion over the course of a lifetime. This indicates that deporting illegal aliens is six times less costly than what it costs American taxpayers to currently subsidize the millions of illegal aliens living in the U.S.

Biden promised to expand immigration to the U.S. if elected president.

Biden also reminded his audience that Latinos were not the only beneficiaries of President Barack Obama’s Deferred Action for Childhood Arrivals (DACA) program, which applied to those brought to the country illegally as children.

He said there were “thousands and thousands of AAPI ‘Dreamers’” who had benefited from DACA as well.

Crazy Joe Claims 150 Million Americans Died From Gun Violence Since 2007, MAJOR Problem With That Claim And He’s Losing It

BREAKING News Out Of California… Horse Trailer Flips On Freeway… LOOK WHAT THEY FOUND INSIDE!!!