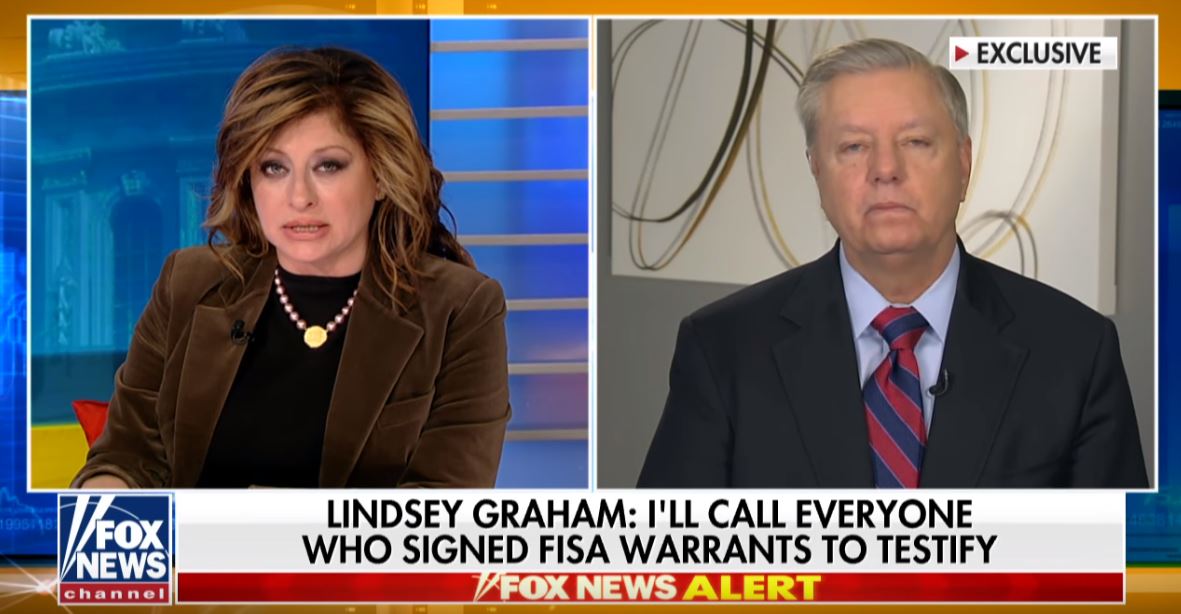 We’ll hold him to it: Graham says he’ll call in ALL persons who signed bogus FISA warrants in Spygate (Video)

Senate Judiciary Committee chair Lindsey Graham (R-S.C.) just made a huge promise on live TV, and you can bet we’re going to hold him accountable for it.

During an interview with Fox Business Network’s “Sunday Morning Futures,” Graham told host Maria Bartiromo that as part of his drive to reform the Foreign Intelligence Surveillance Act (FISA) court, he will call in every person who signed the bogus warrants to spy on 2016 Trump campaign aid Carter Page.

That would include at least:

Dana Boente: She was acting Deputy Attorney General during the same timeframe.

Rod Rosenstein: According to Rep. Devin Nunes’ FISA memo, Rosenstein signed one or more Page surveillance applications as deputy attorney general (when he was handling the Mueller/Spygate probe for the neutered AG Jeff Sessions).

“The Horowitz report is the first step in a long journey regarding FISA abuse,” Graham said. “The FISA court rebuked the FBI, that is a great start.

“They came down hard on the FBI. If they had failed to do that, I would have lost all confidence in the court,” the South Carolina Republican continued.

“No, Comey, it wasn’t sloppy, it was criminal. I’m gonna call every person who signed the warrant application. I’m gonna find out why [former CIA Director John] Brennan went to [former Senate Majority Leader] Harry Reid in September of 2016 to talk about the investigation.

“I’m gonna find out why it took two years for Mueller to realize there was no there, there,” Graham continued. “We’re gonna look long and hard at FISA abuse.”

He also wants to know if there was cooperation between the FBI and CIA to plant the false story that the Trump campaign and Russia “collusion.”

And, senator, we’ll be watching to make sure you do as you say you will do…this time.

And Ted Cruz chimed in:

“A senior lawyer at the FBI fabricated evidence,” Cruz said, outlining what had happened.

Horowitz has found evidence that an FBI lawyer manipulated a key investigative document related to the FBI’s secretive surveillance of Page– enough to change the substantive meaning of the document.

“That is on its face, criminal conduct,” Cruz told Bartiromo. “If you or I did it in a car wreck case, if you’ve got a car wreck and you were in court and you doctored fraudulent documents and submitted it to the court, you or I would serve jail time for that.”

“That’s senior leadership at the FBI. That’s how badly they wanted to spy on Donald Trump and get Donald Trump,” Cruz continued. “It is a horrifying abuse of power.”