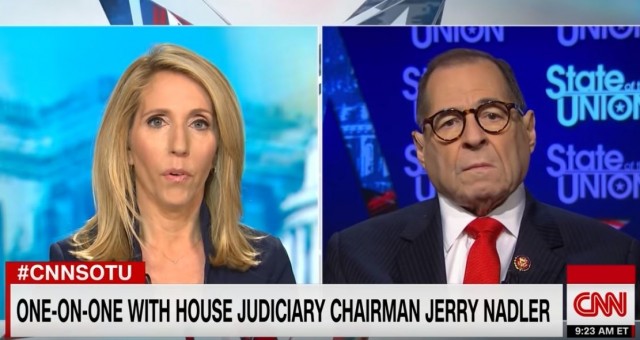 A miracle? CNN’s Dana Bash uses Jerry Nadler’s own words on Clinton’s impeachment to prove what a hypocrite he is (Video)

(TNS) It’s extremely rare, but there are times when CNN does commit random acts of journalism.

And on Sunday, CNN hostess Dana Bash engaged in one of those rare acts.

We all know that the Garbage Party decided on November 9, 2016, they were going to impeach President Donald Trump for something.

They’d make it up. In fact, they — in collusion with Barack Obama, James Comey, Hillary Clinton, and a dozen other deep staters — made up “Russian collusion,” created “Spygate,” and are now pushing the phony “Ukraine quid pro quo/bribery” narrative.

The Democrat media has perpetuated each and every one of these hoaxes. That’s why when we see an actual act of journalism from one of them, we are, frankly, stunned.

Back in the day when Nadler was carrying Bill Clinton’s water, he claimed that impeachment shouldn’t be a “partisan” thing — that both parties ought to be willing to do it, if impeachment needed to happen, in order to make it “legitimate.”

But that was then and this is now and Trump — whom no one expected to win — is sitting in the Oval Office.

So, all bets are off, all previous statements are moot, and onward we must go.

Glorious. You see? CNN is capable of real journalism once in a while so we’ll give them a little credit- very little.

Either way, hardly anyone watches CNN anymore because they suck.

As for Nadler’s claim that Clinton’s impeachment was a partisan affair, 31 House Democrats supported the investigation into his “high crimes and misdemeanors,” and 10 Republicans in the Senate voted not to convict him.

Nadler Wants To Throw Trump Officials In Jail & Fining Them $20,000/Day If They Refuse Subpoenas