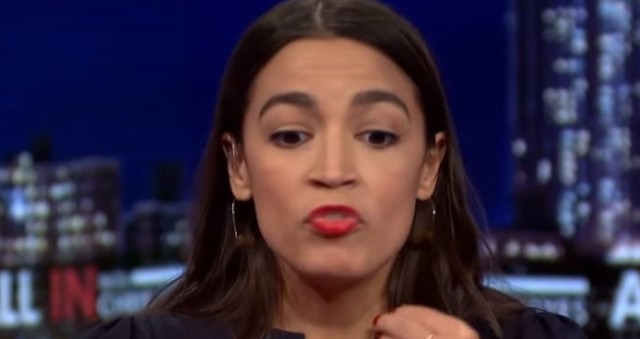 During an appearance on the MSNBC last week, Rep. Alexandria Ocasio-Cortez (D-N.Y.) tried to justify her characterization of Immigration and Customs Enforcement detention facilities as “concentration camps” of the kind used by Nazi Germany to house — and kill — Jews during World War II.

In doing so, she repeated an oft-stated slander: That White House policy adviser Stephen Miller is a “white nationalist” racist who “must go,” and in doing so spouted off one of the most ridiculous conspiracy theories you’ve ever heard — “kindergarten-level,” as talk host Dan Bongino put it.

“You’ll lose approximately 42 IQ points after listening to this complete ignoramus spout another one of her ridiculous, kindergarten-level conspiracy theories,” Dan Bongino tweeted linking a tweet by Ryan Saavedra:

You’ll lose approximately 42 IQ points after listening to this complete ignoramus spout another one of her ridiculous, kindergarten-level conspiracy theories. @aoc https://t.co/x6zRgmx6HZ

Bongino may have underestimated the number of IQ points lost in listening to this abject lunacy. But point taken.

The term “white nationalist” is used by the Left these days to infer “white racism,” of course. It’s not even about the border and the Trump administration’s efforts to enforce immigration law; Leftists like Ocasio-Cortez are merely using that as a wedge issue to push their agenda.

She — and the Left in general — couldn’t care less about migrants and their families, as evidenced by the photo above — she was at the border faking concern about migrant children before an empty parking lot. It was all staged.

What the Left is really interested in is exploiting situations for political gain, nothing more, and at any cost to civility.

But here’s a deeper concern: This moron, this stone racist bigot hypocrite, is the ‘face’ of the Democrat Party.

She’s the party’s future. She and her ‘squad’ of racist bigot hypocrites.

They are well-schooled in identity politics, and they are willing to burn down our society in order to impose their vision of how it should function.

And, as we see with fellow moron Chris Hayes, far too many people in the media are enabling this hate.

It’s no wonder Americans find it increasingly difficult to talk to each other and accept and tolerate opposing viewpoints.

What Is Wrong With Biden? He Tells Trump To “Stop Campaigning” And To “Step Up” As The President Is Stepping Up Like A BOSS To Save America From Global Pandemic
April 1st, 2020 Right Wing Tribune