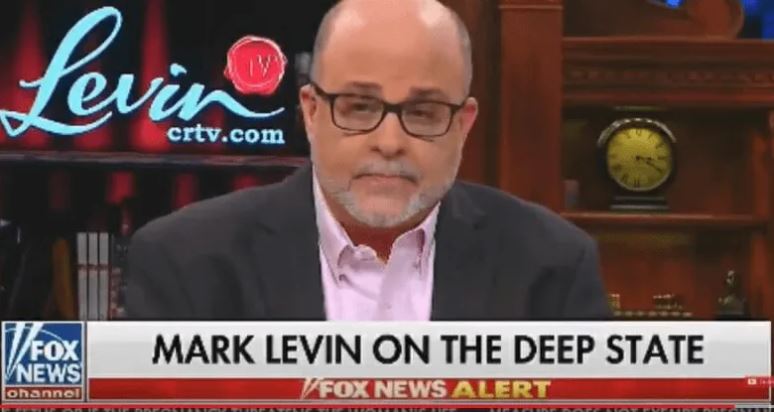 Mark Levin: Because Pelosi has trashed impeachment rules so she can railroad Trump, ‘GOP Senate should refuse to hold the trial’

(TNS) Mark Levin is a national treasure, straight up, and one of the republic’s most capable, ardent defenders.

The effort is being led by one of the most corrupt, lawless, insane person ever to darken the Speaker’s chair — Nancy Pelosi.

As Levin noted on his radio program Thursday, she has completely disregarded all the rules and constitutional precedent to railroad President Trump through an impeachment, just so she and her screwed up party can say ‘We impeached him.’

There’s no evidence to justify impeachment. Trump’s done nothing wrong. He beat Hillary, who — along with the corrupt DNC — conspired with Russia, Ukraine, and Barack Hussein Obama to undermine Trump’s campaign and depose him once he won the 2016 election.

Pelosi and the Democrats are likely going to vote to impeach Trump by Thanksgiving, Levin says — even though there’s been no formal impeachment resolution passed out of the House Judiciary Committee and the full House hasn’t voted on the articles.

Instead, that pencil-necked freak Adam Schiff has been holding “hearings” in secret, not allowing the president’s counsel to be present, not allowing Republicans to question ‘witnesses,’ and leaking lies to the mainstream media which long ago surrendered any semblance of objectivity. They are nothing but paid liars for the Garbage Party.

Well, Levin has a solution for the GOP-controlled Senate: Tell Pelosi to kiss their butts.

Since Pelosi’s corrupted the historic impeachment process by breaking all the rules, Levin says Senate Majority Leader Mitch McConnell (R-Ky.) — who’s up for reelection next year — should make it clear to her and House Democrats that he doesn’t plan to hold an impeachment trial if they continue to say ‘fuck the rules.’

It’s kind of like when McConnell told Obama to beat it, he wasn’t going to hold confirmation hearings, much less a vote, for his third Supreme Court nominee, Merrick Garland.

Yes, the Senate holds those hearings. But there’s no constitutional requirement to give “advise and consent.”

Will the Democrats lunatics object? You bet they will. So will their boot-licking media allies. But whine though they will, there isn’t a damned thing they can do about it.

Levin even noted there is a way to actually hold a vote to change Senate rules allowing McConnell to ‘justify’ not holding a trial — if he has the political nads to pull it off. It’s called the “nuclear option,” and McConnell used it to get Trump’s Supreme Court nominees confirmed. (Click that link — it’s a great explanation of how the option works and exactly how Levin explained it on his show).

In other words, he’s telling McConnell: Don’t screw around on this and let Pelosi breakr the rules and the process to “get Trump.”

After Democrats Shoot Down Stimulus Bill To Help Save America From Coronavirus, Dan Crenshaw NUKES Them, “It Can Save Our Economy, And They Killed It”