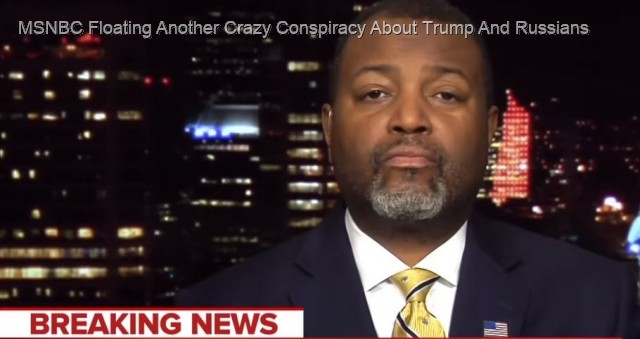 (TNS) There are some conspiracies that are just so stupid even people who want to believe them are revulsed by the mere mention.

None of those people, however, work for MSNBC.

Such is the hatred for President Donald Trump among ‘newscasters’ and hosts alike that a fake national security “expert” named Malcolm Nance can get away with mouthing conspiracies so outlandish and dumb that sane, rational people lose IQ points when they hear them.

Like, did you know that “Russia” has had its hooks in Donald Trump since he married Ivana in 1977?

You bet. Even in the throes of the Cold War with the United States, Moscow’s intel brainiacs could see into the future and knew that someday, somehow, Donald Trump would be president.

The KGB would see to it.

MSNBC analyst Malcom Nance claims that Trump is a Russian asset who was compromised “as early as 1977” via his first marriage to Ivana https://t.co/LxYsa7mGJp

“The former naval intel officer claimed that the president became a Russian asset as early as when he first got married to Ivana,” declared the Daily Beast, whose reporter did, at least, show a healthy skepticism.

MSNBC analyst Malcolm Nance, long one of the network’s loudest voices when it comes to pushing Russiagate conspiracies, claimed Tuesday morning that President Donald Trump is a Russian asset who was compromised “as early as 1977” via his first marriage to Czech-born Ivana Trump.

Nance appeared on MSNBC’s Morning Joe, in a segment first spotted by Mediaite, to hawk his latest Trump-centric Russia book and was immediately congratulated by host Willie Geist for being “out front before most people” were aware of the Kremlin’s attempts to interfere in the 2016 election.

Nance, a retired naval intelligence operator, went on to boast that he saw early in Trump’s presidential campaign that the U.S. was under attack by a “wide-ranging information warfare attack” by Russia that was designed to make Trump president, adding that he saw it “about a year before anyone would really understand that.” …

Citing reporting by The Guardian, Nance said that there were indicators that Trump had been “under Russian intelligence surveillance for a very long time—as early as 1977 with his first wife, Ivana.” Noting that Ivana was from Czechoslovakia, then part of the Eastern Bloc, Nance claimed that the country’s intelligence community at the time was monitoring her and thus gained access to Trump’s communications.

You wait, none of the social media behemoths — Facebook, YouTube, or Twitter — will ‘fact check’ MSNBC or censor these conspiratorial whack jobs they way they do conservatives.

We’d suggest that Nance get some professional help for his Trump Derangement Syndrome, but quite obviously the man’s condition has worsened beyond treatment.

Just In: General Flynn’s Attorney Directly Implicates Barack Obama In The Frame Up of The Gen Flynn