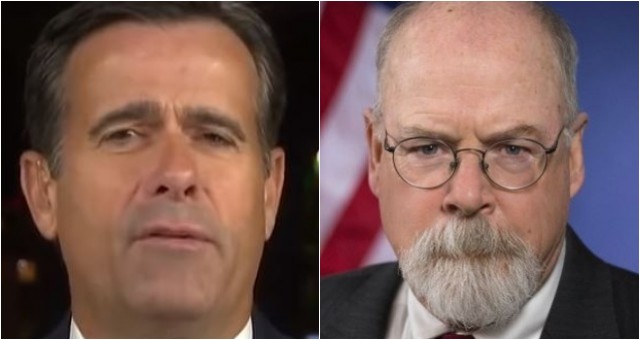 John Ratcliffe: Change In Status Of Durham Investigation Is ‘Not A Coincidence’

Texas Rep. John Ratcliffe said Sunday that it “is not a coincidence” the investigation into the origins of the Trump-Russia investigation morphed into a criminal matter just as the Justice Department’s inspector general is set to release a report of FBI surveillance abuse against the Trump campaign.

Ratcliffe was responding to reports that John Durham, the U.S. attorney in Connecticut, is conducting a criminal investigation into the origins of the Russia probe.

“I don’t believe in coincidences, and the end of the inspector general’s investigation and his impending report coming at the same time as the start of John Durham announcing that this is now a criminal probe is not a coincidence,” Ratcliffe, a Republican member of the House Intelligence Committee, said on Fox News’s “Sunday Morning Futures.”

Attorney General William Barr tasked Durham in May with conducting an administrative review of the matter. The pair traveled to Italy together in September to meet with Italian intelligence officials as part of the investigation.

The shift in Durham’s investigation was reported Thursday, the same day Michael Horowitz, the DOJ inspector general, informed Congress that he is putting the finishing touches on a report of possible FBI abuse of the Foreign Intelligence Surveillance Act (FISA) during the investigation of the Trump campaign.

Horowitz said the report is “lengthy” and will be released with few redactions.

Republicans believe a lengthy report signals that the investigation has turned up wrongdoing.

Ratcliffe noted that Durham, unlike Horowitz, has the ability to issue indictments, subpoenas, and present evidence to a grand jury as part of his investigation.

“John Durham announcing that this is now a criminal matter is a significant development,” said Ratcliffe.

The FBI relied heavily on the unverified Steele dossier in applications to conduct surveillance against Carter Page, a Trump campaign aide.

It is unclear what prompted the change in the status of Durham’s inquiry, or when it became a full-blown criminal investigation. One possibility, which Ratcliffe noted, is that Durham is investigating criminal referrals stemming from the Horowitz investigation.

Content created by The Daily Caller News Foundation is available without charge to any eligible news publisher that can provide a large audience. For licensing opportunities of our original content, please contact licensing@dailycallernewsfoundation.org.

After Comey Is Torn To Shreds By IG, Brennan Threatens Trump, Barr & Senate Republicans On Twitter “… Their Protective Cocoon Is Only Temporary”

Major Development In Durham’s SpyGate Investigation According To New Report