California Gov. Gavin Newsom has issued a State of Emergency.

SACRAMENTO — Governor Gavin Newsom today issued an emergency proclamation for the counties of Sonoma and Los Angeles due to the effects of the Kincade and Tick fires, which have destroyed structures, threatened homes and critical infrastructure, and caused the evacuation of tens of thousands of residents.

Later today, Governor Newsom will travel to Sonoma County to survey areas impacted by the Kincade Fire and meet with emergency responders, residents, health officers and local and state officials.

Yesterday, the Governor announced that the state has secured federal Fire Management Assistance Grants to help ensure the availability of resources to fight the Kincade and Tick fires and enable local, state and tribal agencies to recover eligible costs. Yesterday, the Governor also held a public briefing in Los Angeles regarding the ongoing fire threats and the need to hold utilities accountable for the consequences of their decisions to shut off power for large portions of the state.

The full text of the proclamation is below: 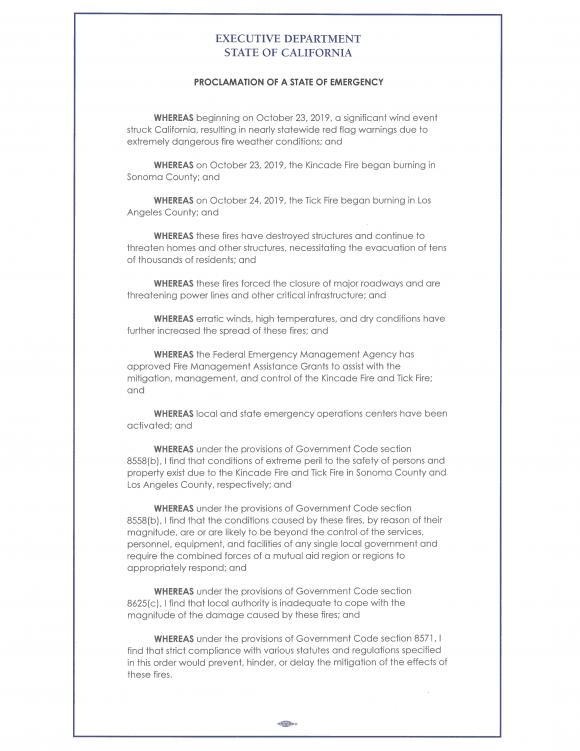 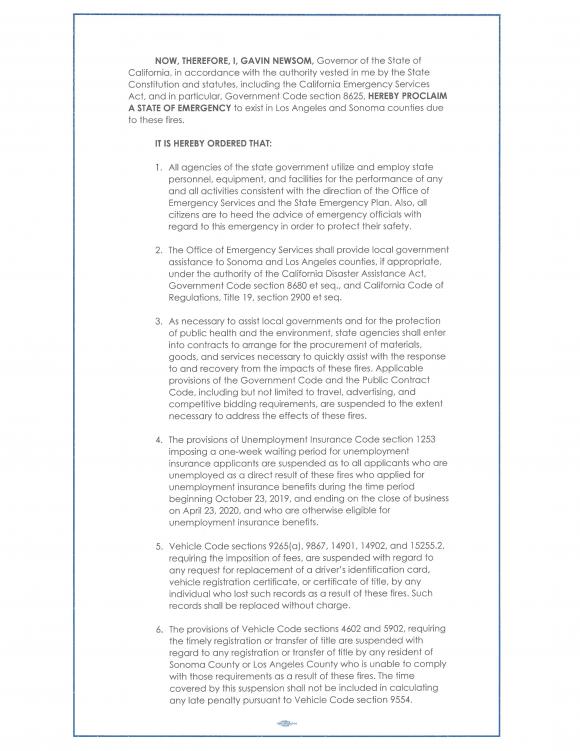 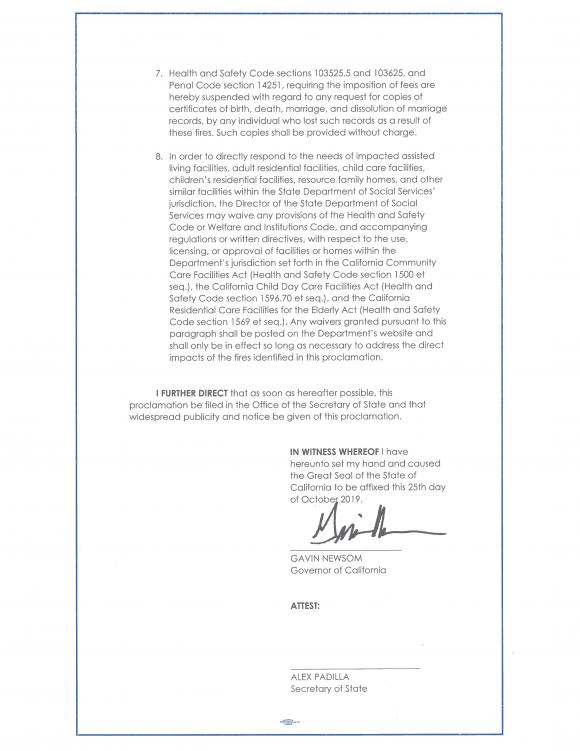 Meanwhile, the state utility that has been criticized for imposing blackouts in order to prevent such wildfires says a transmission line that it didn’t shut off may have been the source of a blaze that on Friday was raging out of control in the Golden State, FOX News reports.

The Kincade fire near the Northern California town of Geyserville so far has burned at least 49 buildings and 34 square miles and prompted evacuation orders for some 2,000 people.

It was driven by the strong winds that had prompted Pacific Gas & Electric to impose sweeping temporary blackouts affecting a half-million people in Northern and Central California. PG&E resorted to the shutoffs after fallen power lines and other electrical equipment were blamed for several blazes in recent years.

The Tick fire has burned 4,300 acres northwest of Los Angeles.

Both fires were only 5 percent contained as of Friday morning local time, according to the California Department of Forestry and Fire Protection.

The #TickFire is causing unhealthy air quality across L.A. County. Stay indoors with doors and windows closed, run the AC, and limit physical exertion, even if you can't see or smell smoke. Read more: https://t.co/U0lll3jFi0 pic.twitter.com/IBrBiWJfur

#TickFire Unified Incident Commanders from @LACOFD & @LASDHQ will be conducting a press briefing this evening at Central Park in Santa Clarita at 5:00pm. pic.twitter.com/QrRHE1tRGN

Extremely Critical Fire Weather Conditions continue today in southern California. Temperatures in the 90s with very low humidity will combine with wind gusts of up to 60 mph to create favorable conditions for extreme fire behavior and rapid growth. pic.twitter.com/yHqfvKvytT

STAY SAFE OUT THERE PATRIOTS!

WE WANT TO THANK EVERYONE PUTTING THEIR LIVES ON THE LINE TO FIGHT THESE FIRES!

BREAKING NEWS Out Of Calfornia