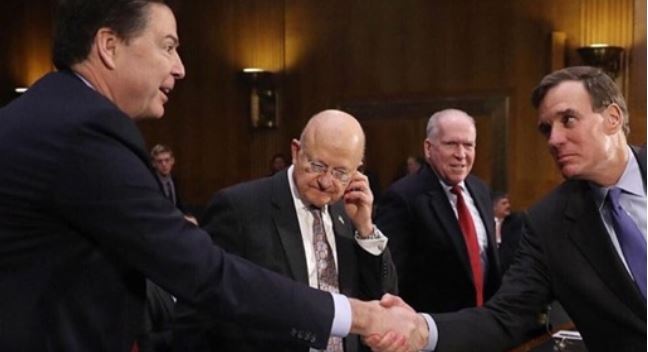 Opinion| Democrats may suck at policy but they have mastered the art of the con.  The bigger the production – like the parade of ‘whistleblowers’ we’re about to be inundated with – the more people might become convinced there’s something to their claims.  Facts be damned.

Harken back to the confirmation hearings of now-Supreme Court Justice Brett Kavanaugh.

Kavanaugh was, and remains a man of impeccable credentials, both as a jurist and as a person.  But, his originalist view of his judicial responsibilities didn’t square with the radical left’s agenda, so they committed huge amounts of money to discrediting him.

And Democrats, led by Senate Minority Leader Chuck Schumer did their bidding by coordinating with protesters to turn the hearings for Supreme Court nominee Brett Kavanaugh into a disgraceful exhibition meant to turn public opinion against Trump’s nominee.

Brian @krassenstein admits to being paid for anti-Trump tweets in secret recording.

"Of course there are higher ups that are paying us. They want us to help sow the division and to take over Trump's Twitter feed. When [Trump] makes a post they want our tweets to be up there." pic.twitter.com/qPIaktaqCV

“Of course there are higher ups that are paying us. They want us to help sow the division…”

Democrats plotted coordinated protest strategy over the holiday weekend and all agreed to disrupt and protest the hearing, sources tell me and @frankthorp

Democrats plotted coordinated protest strategy over the holiday weekend and all agreed to disrupt and protest the hearing, sources tell me and @frankthorp

So it comes as no surprise that the same groups that funded that sh*tshow against Kavanaugh are at it again.  This time to create a predicate for impeachment because they sure as hell ain’t beating President Trump in 2020, something they readily admit.

Cue Russian collusion 2.0.  Fresh off their nearly three year assault on President Trump, that has successfully divided the nation into entrenched camps, Democrats have turned to the usual radical groups to begin Ukraine 1.0.

The point men for this latest effort to con the public are attorneys Mark S. Zaid and Andrew P. Bakaz.  Through a series of tweets earlier today they confirmed that are now representing at least one additional whistleblower.

Both have deep ties to the intelligence community.  And, both have ties to Democrats, far-left groups and the agents who fund them.

(Breitbart) Zaid co-founded Whistleblower Aid… with John Tye.  Tye has worked at the Southern Poverty Law Center, Avaaz, and also Southeast Louisiana Legal Services as a Skadden Fellow. He was on the board of directors of the American Civil Liberties Union of Louisiana.

Avaaz, a radical group where Tye served as campaign and legal director, describes itself as a “global web movement to bring people-powered politics to decision-making everywhere.” The group has repeatedly engaged in anti-Israel activism.

Channeling the mantra of radical community organizer Saul Alinsky, Avaaz says it aims to “organize citizens of all nations to close the gap between the world we have and the world most people everywhere want.”

… Zaid doubles as Executive Director and founder of the James Madison Project, which says it seeks to promote government accountability.  The Project features on its four-person advisory board John Podesta, who led Hillary Clinton’s 2016 presidential campaign, served as Chief of Staff to Bill Clinton and founded the Soros-funded Center for American Progress pushing a progressive agenda. (read more)

SURPRISE Democrat lawyer has other secret sources. Swamp Media will corruptly fail to point out it means nothing, now that conversation is public. No money, no quid pro quo unlike Biden helping son make millions from Ukrainian crook. ORCHESTRATED DEM CAMPAIGN LIKE KAVANAUGH

Ukraine 1.0 has another thing in common with Russia 1.0 – there’s no there, there.

The fake news media is LYING to you about @realDonaldTrump – watch @TeamTrump expose them with the FACTS!

SHARE this with everyone you know because the media is committing malpractice in deleting 500 words from a transcript… pic.twitter.com/cvFpZf093y

Here’s what was said during the phone call, however.

Crowdstrike was the private security firm that the DNC hired to verify claims that their server(s) had been hacked by Russia.  The entire Trump-Russia collusion narrative collapses if Russia wasn’t responsible for the hack.

And, when that happens, the credibility of the intelligence community collapses with it.

Once voters understand that Trump was set up and framed by intelligence ops like the whistleblower in 2016, falsely accused of being a Russian agent, then impeachment will be seen for what it is — a political putsch to cover their tracks.

This article originally appeared at ILLICIT INFO Opinion Blog and was republished with permission.

BREAKING: After SCOTUS Delivers Blow To Trump On DACA- He Gets Homeland Security Involved

Will Trump’s running as an outsider play as well at the polls as it did in 2016?
October 25th, 2020 Liberty Unyielding

Biden Brags About Having ‘Most Extensive Voter Fraud Organization’ in History
October 25th, 2020 The Lid

Flu shots just killed nine people in South Korea – and the season is only getting started
October 25th, 2020 DC Clothesline