Scott Levy, the CEO of Fuel Online, received thousands of retweets after offering $100 Amazon gift cards that he promised to give to ten people in need on Twitter.

Levy was targeting the MAGA base with the hashtag “#TwitterPhilanthropy.” Twitter Philanthrophy has been going viral among Trump supporters looking to help impoverished Americans, especially veterans.

After two days, and after receiving over two thousand retweets, Levy added a requirement that his tweet reach 2,500 retweets, or he wouldn’t give away the $100 gift cards. 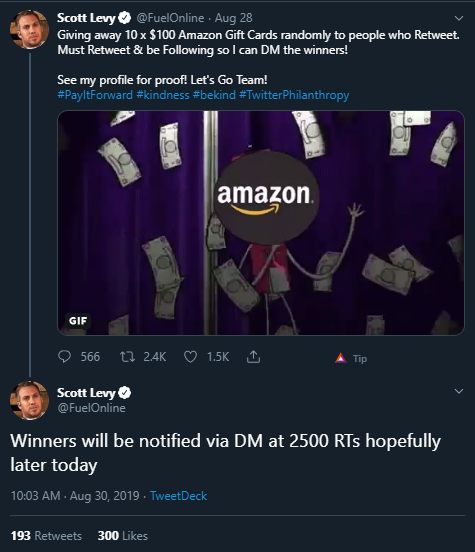 Levy then deleted his original offer.

Levy’s company, Fuel Online, has a Yelp page where anyone can leave reviews. Fuel Online is an internet marketing company that promises to work “24/7 to improve your search engine rankings.”

How will Fuel Online’s internet reviews look when the MAGA base finds out its CEO Scott Levy scammed Trump supporters for retweets?