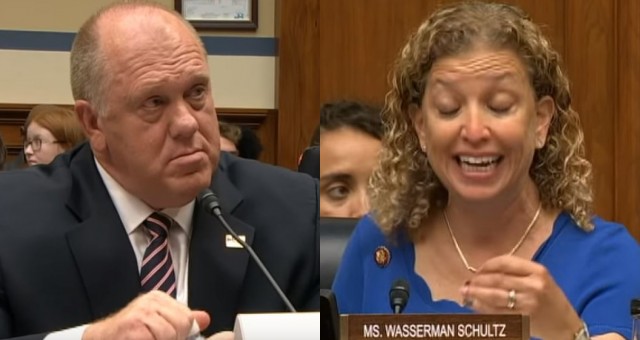 (NationalSentinel) The former acting director of the Immigration and Customs Enforcement agency angrily countered  accusations from Rep. Debbie Wasserman-Schultz (D-Fla.) on Wednesday after she accused him of providing false testimony regarding the ongoing national emergency involving migrants along the U.S.-Mexico border.

During an appearance before the House Oversight and Reform Subcommittee on Civil Rights and Civil Liberties hearing on Medical Deferred Action for Critically Ill Children, the Florida Democrat directly challenged Homan, claiming that his testimony was “false” and “unacceptable.”

“Since it has not been done, I think it is important that the jingoistic, bigoted testimony of Mr. Homan is called out as nearly completely untrue, as being an outrage, and as a former official directing the (ICE), he should know better,” she said.

As the chair attempted to cut off Wasserman-Schultz and crosstalk ensued, Homan demanded to know, “What did I say that was inaccurate?”

“This is my five minutes,” she responded. “I’m not asking a question.”

After the chair said he would “attempt to resolve” her concerns, Rep. Jim Jordan (R-Ohio) began questioning the former acting director.

“Mr. Homan, is there a crisis on the border?” Jordan asked.

“And has there been a crisis for a long time?” the Ohio Republican continued.

Jordan said he was trying to establish Homan’s testimony as part of a “broader issue” of large numbers of “border apprehensions” over the past several months, which led President Donald Trump to declare a national emergency in the first place.

“Absolutely, and if I can respond to the earlier remark from Wasserman-Schultz, I forgotten more about this issue than you’ll ever know,” Homan said, directing his comments in her direction. “So to say my testimony is inaccurate is wrong. Everything I said here is accurate. Bottom line. And if you want to go toe-to-toe, I’m here. I’m here on my own time to speak to the American people.”

Wasserman-Schultz said she’d be “glad to go toe-to-toe with you, Mr. Homan.”

“Well, I’m here,” he said. “But you gotta let me respond to your question rather than dropping a bomb and running away,” Homan countered.

Earlier, Homan blasted Rep. Alexandria Ocasio-Cortez (D-NY), the chairwoman of the subcommittee, over her vitriolic remarks about ICE in the past, calling for the agency to be disbanded and accusing customs officials of running “concentration camps” for migrants:

Yeah, I want to address the last comments made about me being appalling and–and first of all I serve my country for 34 years, I saved many lives and I ran an agency–let’s be frank about what ICE does. ICE last year took a season opioids off the streets of this country that could have killed every man, woman, and child in the United States twice. They have arrested thousands of sexual predators that prayed on children.

They rescued thousands of children who are victims of predators. They are arrested hundreds of women that were victims of sex trafficking. I am proud of the agency and ICE and what we don’t want to talk about is nearly 90% of everybody ICE or risk for immigration violations either have a criminal history or a pending criminal charges when they are found meaning they were found in a county jail which most likely means they are more than a choir boy.

So to–to miss message what the work the men and women of ICE do is I find appalling that a member of Congress would throw that out there like that.

The Democrat-controlled House has repeatedly refused to work with Republicans and the Trump administration to address loopholes in immigration and asylum laws that experts have repeatedly testified before various committees are serving as magnets for tens of thousands of migrants.

BREAKING: Over 271 ARRESTED In 4 Day Operation… LOOK WHERE THEY FOUND THEM!

BREAKING: Portland Thug Charged With Assaulting US Marshal With Baseball Bat- Here’s What We Know