U.S. to sign new trade deal with Japan worth billions, to include farm and digital products and reductions in tariffs 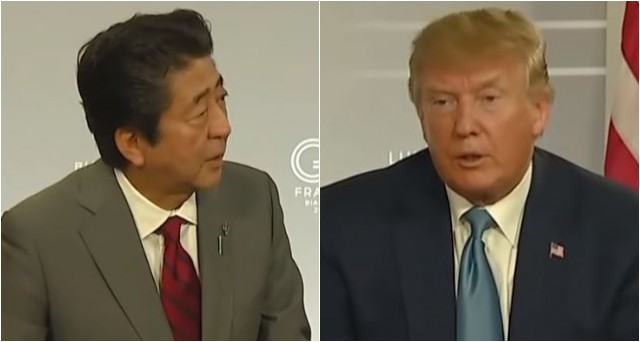 (NationalSentinel) President Donald Trump and Japanese Prime Minister Shinzo Abe closed a new trade deal worth billions to the United States and Japan in what the PM called a “win-win” for both countries.

Trump, who is attending the G7 conference in France, confirmed Sunday that “it’s a very big transaction and we’ve agreed in principle.”

The president said the prime minister agreed to purchase some of U.S. farmers’ corn, and he blamed China for the excess production American farmers currently have on hand.

“We still have some remaining work that has to be done at the working level, to finalize the wording and content in the deal,” Abe explained, through an interpreter.

China had pledged to purchase more U.S. agricultural products, but continually reneged on the agreement, according to the president and U.S. officials.

“From our point of view it is extremely important for our farmers and ranchers and those who work in the digital space,” he said, noting Japan is “our third largest advocate to market,” Lighthizer noted.

Japan already imports $14 billion in agricultural products, and the USTR said the agreement would open up $7 billion more.

Within agriculture, Lighthizer said the new agreement is huge for U.S. beef, pork, wheat, dairy products, wine, ethanol “and a variety of other products.”

The U.S. already sells more than $2 billion in beef to Japan, and Lighthizer said a reduction in tariffs will “allow us to do so with lower tariffs and to compete more effectively with people” in Trans-Pacific Partnership (TPP) countries and Europe.

Trump Calls Out FBI Director Chris Wray After Responding To FISA Abuse Claims, “Are These Dirty Cops Going To Pay?”

UNHINGED: Pelosi Calls Trump, Republican Allies Domestic ‘Enemies of the State’ And It’s Time For Her To Step Down Immediately