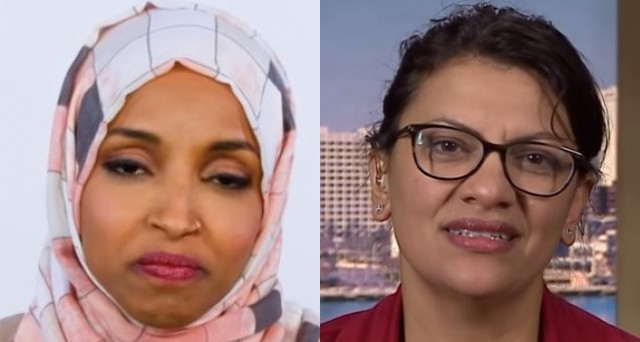 Top Democrats and the establishment media have been extremely critical of Israel’s decision to bar Reps. Ilhan Omar (D-Minn.) and Rashida Tlaib (D-Mich.) from the country over fears they would use the trip to incite anti-Jewish hatred, but one pundit is pointing out they were silent when Democrats in an American city told President Donald Trump he wasn’t welcome recently.

“Banning Congresswomen Omar and Tlaib from entering Israel and Palestine is a sign of enormous disrespect to these elected leaders, to the United States Congress, and to the principles of democracy. The Israeli government should reverse this decision and allow them in,” Sanders, a leading 2020 Democratic presidential contender, complained on Twitter.

House Speaker Nancy Pelosi, meanwhile, said the decision was “beneath the dignity of the great state of Israel,” while also hitting the president over his suggestion that Israel bar the two anti-Semitic congresswomen access.

And another 2020 Democratic presidential contender, New Jersey Sen. Cory Booker, implied that Israel’s blocking of Omar and Tlaib was influenced by “the dangerous nature of Trump’s racist rhetoric.”

Omar herself called the ban “an insult to democratic values,” though she has regularly bashed Israel and has made a number of anti-Semitic statements.

But Sean Davis, co-founder of conservative outlet The Federalist, was quick to point out the hypocrisy of both the media and Democrats who were silent when a pair of Democratic officials in El Paso tried to politicize the recent shooting there by publicly shaming the president and telling him he wasn’t “welcome” in the city.

“It sure is strange how the media cheered left-wing activists who said Trump was ‘not welcome’ in El Paso, then turned right around and bashed Israel for saying two anti-Semites who deny Israel’s right to exist weren’t welcome in the country,” Davis said.

It sure is strange how the media cheered left-wing activists who said Trump was "not welcome" in El Paso, then turned right around and bashed Israel for saying two anti-Semites who deny Israel's right to exist weren't welcome in the country.

Davis then went on to list several instances where Leftists and the media said that the president wasn’t welcome.

The congresswoman, who represents El Paso, just said President Trump is “not welcome” to visit https://t.co/QaHWlj60mO

Rachel Maddow astounded that President Trump is not welcome in El Paso: "That is profound" https://t.co/PVAQR4ZBFe

Beto O'Rourke accused President Trump of inciting racism and inviting violence and said he is not welcome in El Paso. https://t.co/OGu9WMZbPV pic.twitter.com/odXhkX7IKZ

There were many more examples that Davis noted and listed.

Not So Fast: Ilhan Omar & Rashida Tlaib Want To Visit Israel, But Netanyahu Is The One Who Will Decide If They Are Allowed

BREAKING: Iranian Military Base Just BOMBED… Look Who Did It!

BREAKING News Out Of Israel… Here’s What We Know