Nancy Pelosi’s Daughter Makes Stunning Admission About Epstein & Alleged Pedophile Bust: “Quite Likely That Some of Our Faves Are Implicated” 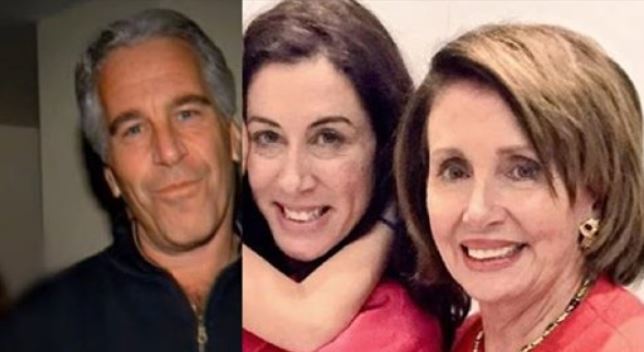 Let’s begin by taking a stroll back in time using Twitter’s time machine:

Merrill: “I’ve worked for Hillary Clinton for a decade and 2 things are true. 1) She has enormous respect for the Secret Service & a great relationship with the agents on her detail. 2) This guy was never on the Clintons’ detail, & I don’t recognize him in the slightest.”

I’ve worked for Hillary Clinton for a decade and 2 things are true.
1) She has enormous respect for the Secret Service & a great relationship with the agents on her detail.
2) This guy was never on the Clintons’ detail, & I don’t recognize him in the slightest. https://t.co/0wgPINBZWu

Then Bongino began dropping bombs… one after another.

This guy is a fraud. She treated the Secret Service terribly.So badly that a female agent threatened to quit rather than stay in the Scooby van another minute with her (Unlike this loser, I have names & dates).In addition, I have mounds of official documents backing up my work. https://t.co/uFyycpBYrL

Be careful Nick, people know things not yet released publicly about your messiah Hillary. Don’t poke the bear loser, you may not like the results. #Epstein #EmailGate

Dear Nick, are you guys sure you know everyone on the Epstein planes?

By the end of their mostly one-sided Twitter exchange, Bongino had unloaded an ominous warning on Merrill concerning covicted sex offender and alleged pedophile Jeffrey Epstein and his ties to Bill and Hillary Clinton and many of their influential associates.

And, while the wheels of justice turn slowly, we went to sleep last night having learned that Epstein had been arrested:

Christine Pelosi, Speaker of the House Nancy Pelosi’s daughter began readying her followers for the worst:

This Epstein case is horrific and the young women deserve justice. It is quite likely that some of our faves are implicated but we must follow the facts and let the chips fall where they may – whether on Republicans or Democrats. #WeSaidEnough #MeToo https://t.co/2mvskwQwW1

WTF?  Pelosi is signaling her followers that it’s “likely” that certain politicians, influence peddlers, academicians, and business leaders she likes are going to be outed by Epstein’s arrest?

Why would she say that unless she had prior suspicions?  And, if she did, why did this self-proclaimed feminist and protector of innocent little girls (boys?) remain silent.

What do you mean “our faves” child rapists, Kemosabe? https://t.co/R9ecJHKxZL

We know why.  Powerful people hurt those who threaten them.  And, that’s the way it remains until those powerful people lose their power.

In Joe Biden’s words, “c’mon folks.”  None of this is exactly a surprise.

We’ve been reporting on open source files about the Clintons and Epstein since early 2016.  Other alternative news sites probably longer ago than that.

A month after President Trump assumed office he announced a White House initiative to take legislative action to finally put an end to human trafficking.

If anyone in the mainstream media gave a spit they would have at least investigated the allegations that were being floated.  Instead, they buried the story and protected the Clintons… and themselves. And they let these poor children suffer.

Lauer’s career was destroyed instead of winning a pulitzer for uncovering the most heinous abuse of power by public figures, imaginable.

The Miami Herald deserves a great deal of credit for their work in getting us to this point.

Now, it’s up to President Trump to make it rain:

Queen Pelosi Demands That This Video Is Scrubbed From Facebook Which Trump Tweeted, Featuring Her Ripping Speech