Rush Limbaugh nails it: Democrats ‘are a bigger hate group than the KKK’ 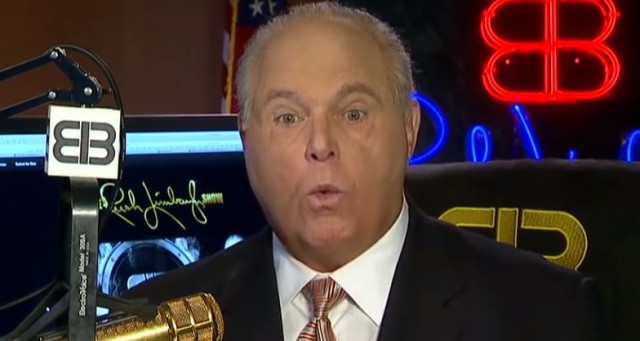 Long-time listeners of talk radio legend Rush Limbaugh know that he doesn’t say things for “shock value” or to be “controversial,” though often the things he says indeed do shock people and are immediately controversial — for those on the Left.

For his supporters and most conservatives, however, we know that Rush makes points — he doesn’t seek to “score” points when it comes to politics and especially the Democrat Party.

To that end, he made a very poignant observation Friday during his program about the Donkey Party after suffering through two nights of debates featuring 10 candidates each: The Democratic Party is being run by hatemongering people who are perpetually angry and have nothing uplifting or inspiring to say that would win converts to their cause.

They are a gigantic hate group, in other words, and are far larger than the militant KKK the party once embraced and supported:

Folks, I have to tell you here, the Democrat Party is not just the country’s biggest hate group now, which I have said on previous indication. ‘Cause that’s what they were. It is what they have become. They are a little self-contained hate group. They have more hate than any extreme right-wing group they claim to be afraid of or opposed to than you can count. They have more hate than any of the hate that was a Charlottesville. They’ve got more hate for us (conservatives). The difference in the world is that their hatred for us is somehow justified and promoted…

He also noted that the mainstream media — in this case, debate host NBC News — had no interest in pursuing this line of thought or questioning with the candidates. In fact, Limbaugh noted, it was like there were two sets of Democrats in the debate forum last night — one to ask the questions, and another to answer them:

He also noted, among other things, what freedoms and liberties bequeathed us by our founders the Democrat [Hate] Party threatens:

They’re all on the same page now. Their attitude, their views on abortion and human life is just shocking. There isn’t any comparison to the pro-life view and the pro-abort view that the Democrat Party has. And if you’re gonna assign hate to one of those groups, you’re not gonna find hate on the pro-life side. By definition, you can’t. But you can certainly find it on the so-called pro-choice side.

They seek control over life, liberty, and the pursuit of happiness, and they do so from a position of rage and anger. They are angry that the concepts of life, liberty, pursuit of happiness exist. And their mission is obviously to shut them down. Whatever it takes, for example, to save the planet from things human beings cannot and never have been able to control. But it will allow them to control people all over the country if they ever do achieve their climate change objectives.

It’s hard to argue with that assessment. And because it is, another observation Rush made rings true: The biggest winner overall following these first two initial Democrat debates is…POTUS Donald Trump, whose pro-America, MAGA message is positive, inclusive, hopeful, and inspiring.

Impeachment 2.0: House Impeachment Managers Insist ‘Trump Not Exonerated’ – Because, “It Was Not a Fair Trial”