By JonDougherty at The National Sentinel

Iran could be preparing to attack U.S. and Israeli forces, and perhaps even arch-rival Saudi Arabia, though such assaults would not come directly from Tehran’s forces. 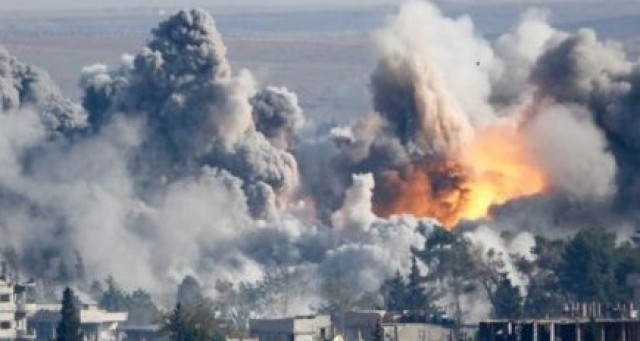 The Guardian reported Friday that Iran’s most senior military leader met recently with militia leaders in Iraq and told them to  “prepare for proxy war.”

Two senior intelligence sources said that Qassem Suleimani, leader of Iran’s powerful Quds force, summoned the militias under Tehran’s influence three weeks ago, amid a heightened state of tension in the region. The move to mobilize Iran’s regional allies is understood to have triggered fears in the US that Washington’s interests in the Middle East are facing a pressing threat. The UK raised its threat levels for British troops in Iraq on Thursday.

While Suleimani has met regularly with leaders of Iraq’s myriad Shia groups over the past five years, the nature and tone of this gathering was different. “It wasn’t quite a call to arms, but it wasn’t far off,” one source said.

The meeting has led to a frenzy of diplomatic activity between US, British and Iraqi officials who are trying to banish the specter of clashes between Tehran and Washington and who now fear that Iraq could become an arena for conflict.

The gathering partly informed a US decision to evacuate non-essential diplomatic staff from the US embassy in Baghdad and Erbil and to raise the threat status at US bases in Iraq. It also coincided with a perceived separate risk to US interests and those of its allies in the Persian Gulf and led to a heightened threat that more than a decade of proxy conflicts may spill over into a direct clash between Washington and Tehran.

Leaders of all the militia groups that fall under the umbrella of Iraq’s Popular Mobilisation Units (PMUs) were in attendance at the meeting called by Suleimani, the intelligence sources claimed. One senior figure who learned about the meeting had since met with western officials to express concerns.

Once bitter enemies, Iran and Iraq have drawn closer since the U.S. deposed Saddam Hussein in the early 2000s. Since the U.S. largely withdrew its forces from Iraq under President Obama, the Iranians have been working to infiltrate and influence the Iraqi government to Tehran’s advantage.

As for Suleimani, he’s been Iran’s most influential powerbroker for about 15 years in Iraq and Syria, leading Tehran’s efforts to reshape the region in its image.

“Even our short-range missiles can easily reach (U.S.) warships in the Persian Gulf,” Mohammad Saleh Jokar, the Guard’s deputy for parliamentary affairs, was quoted by Fars as saying.

“America cannot afford the costs of a new war, and the country is in a bad situation in terms of manpower and social conditions,” he added, perhaps responding to published reports regarding political discourse in the U.S. as well as a military that is stretched thin.

In addition to Iraqi militias, Iran supplies and helps train other groups including Hamas and Hezbollah, both of which have a heavy presence throughout the Middle East. Both groups are considered heavily armed and a threat to U.S. and Israeli forces.

This article was written by JonDougherty at The National Sentinel and was republished with permission.

Breaking: Trump Unleashes More Bombing Runs On Targets In Follow Up To Strike On Iranian Commanders

BREAKING: Israel Just Bombed The Hell Out Of Syria!!!

Left puts foot in mouth…Calling for uprisings is ok but only if Pelosi calls for them?
January 16th, 2021 The Real Side With Joe Messina