Nancy Pelosi has demonstated once again that she is unfit to serve anymore due to an obvious extreme case of Dementia. 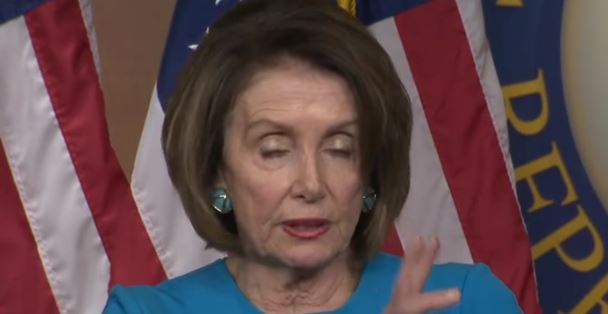 The Speaker of The House claims that Democrats have NEVER denied that we have a crisis at the U.S.-Mexico border a crisis.

What in the hell is she talking about? Dems and the lamestream media have been calling it a “manufactured crisis” for months!

“Well, let me just say this. We have never not said that there was a crisis — there is a humanitarian crisis at the border, and some of it provoked by the actions taken by the administration,” Pelosi said during her weekly press conference.

Again, she has lost her mind.

“What is happening at the border is tragic and we hope to address some of that in the disaster supplemental. And we understand our responsibility to secure our border.”

Y’all are on record saying that there is no crisis and have blamed President Trump for fueling racism and division over his stance on securing the border so which one is it?

I mean, there it is right there. It’s insane!

“The President’s unlawful declaration over a crisis that does not exist does great violence to our Constitution and makes America less safe, stealing from urgently needed defense funds for the security of our military and our nation,” read a joint statement from Pelosi and Senate Minority Leader Chuck Schumer in February, attacking President Donald Trump for declaring a national emergency at the border.

“The first, most dramatic thing we found was there is no crisis at the border,” House Majority Leader Steny Hoyer said in February after visiting the border near El Paso, Texas.

Yeah, just like when Jim Acosta reported from a secure area with a nice border fence pointed out that there was no problem there which totally backfired and made the point that the wall/fence works!

What an a-hole that dude is.

“The only people who believe there is not a crisis on this border are the Democrats in that building. They won’t take any action.” –@GOPLeader pic.twitter.com/JZSydWm31m

Democratic governors across the U.S. also contended that there was no crisis, and their positions on the issue resulted in less manpower at the U.S.-Mexico border. Three Democratic governors — Gavin Newsom of California, Tony Evers of Wisconsin, and Michelle Lujan Grisham of New Mexico — pulled their state’s National Guard troops from the border.

“There is simply not ample evidence to support the president’s contention that there exists a national security crisis at our southwestern border,” Evers stated in February. “Therefore, there is no justification for the ongoing presence of Wisconsin National Guard personnel at the border.”

However, as thousands of illegal aliens have continued to reach the U.S. border every month, pushing immigration facilities past their breaking point, Democrats have begun changing their tune. April marked the second consecutive month where encounters at the southern border topped 100,000 and Border Patrol apprehension numbers have risen every month this year.

Pelosi said during the Thursday press conference it was necessary for the GOP and Democrats to reach a consensus on immigration reform.

“We have to, I believe, come to comprehensive immigration reform,” she continued. “We have to do it in a way that secures our borders, has a path to citizenship, respects the value of family to us.”

Look, we all know that the dems will fight anything and everything that Trump and the Republicans put on the table.

Spare us from your BS you demented old hag.

Team Schiff, Biden, Pelosi Run For The Hills As Rudy Drops Another Nuke: He Forced Out Ukraine Ambassador Marie Yovanovitch For Hiding Dem Corruption At The Highest Levels

Liberal Journalist Goes to Border to See if Trump Is Right, What He Finds Out Shocks Everyone

Some Congressmen Finally Willing to Fight… for Islamic Terrorists Who Call for Death to America
January 15th, 2021 Sons of Liberty Media