The New York Democrat and her chief of staff, Saikat Chakrabarti, held legal control over Justice Democrats at the same time the political action committee was playing a key role in supporting her campaign, The Daily Caller News Foundation revealed in March.

The FEC complaint, first reported by Fox News, also alleges that Ocasio-Cortez’s campaign benefited from a “subsidy scheme” carried out by Justice Democrats. The complaint is the third filed against Ocasio-Cortez in the past five weeks.

Coolidge Reagan Foundation President Dan Backer said he will sue the FEC for delay if the commission fails to act on his complaint within 120 days. Backer added that such an action could give him the opportunity to take the complaint to court, which he said would “force Ocasio-Cortez and these parties to intervene in defense of their actions.”

The complaint cites TheDCNF’s report in its complaint and alleges that Ocasio-Cortez, her campaign and Justice Democrats violated the law by failing to report their affiliation to the FEC.

“If the facts as alleged are true, and a candidate had control over a PAC that was working to get that candidate elected, then that candidate is potentially in very big trouble and may have engaged in multiple violations of federal campaign finance law, including receiving excessive contributions,” former Republican FEC commissioner Hans von Spakovsky previously told TheDCNF.

Justice Democrats stated on its website from December 2017 until two weeks after Ocasio-Cortez’s June 2018 primary victory that she and Chakrabarti held “legal control over” the PAC, and corporate filings obtained by TheDCNF show that the two served on its three-member board during her primary campaign.

Former Justice Democrats staffer Max Berger tweeted after Ocasio-Cortez’s primary victory over incumbent Democratic Rep. Joe Crowley that the PAC decided in 2017 to go “all-in” on supporting her campaign. The tweet was deleted sometime after it was included in a DCNF story. 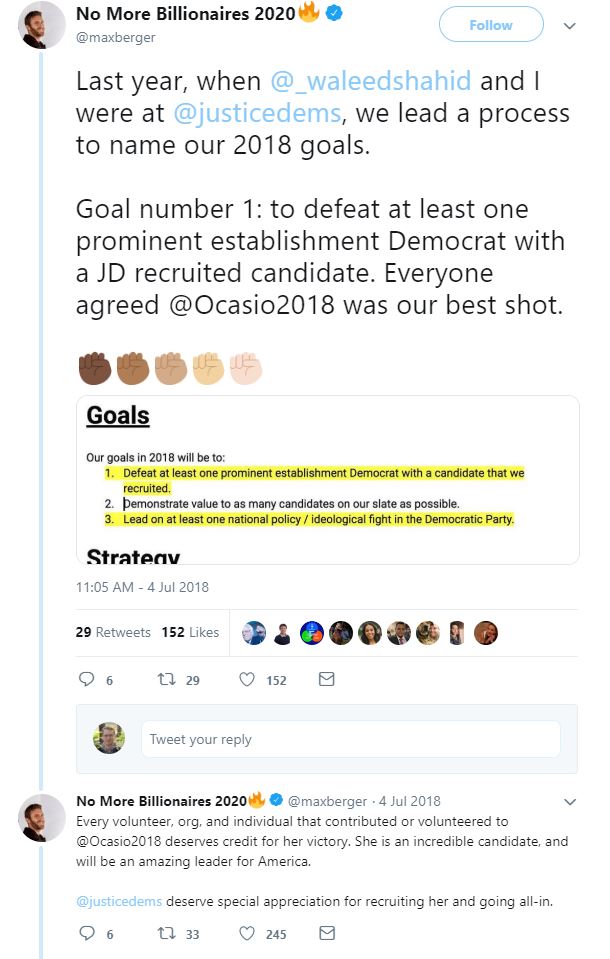 Justice Democrats confirmed to the New York Daily News in March that Ocasio-Cortez resigned from Justice Democrats’ board on June 30, 2018 — four days after her shock primary victory.

“The primary election is the only election that matters in her district, yet she’s pretending she did something good by stepping down from her board position with Justice Democrats after the primary,” the director of the National Legal and Policy Center’s Government Integrity Project, Tom Anderson, told TheDCNF. “This only raises more questions than answers, specifically: did Ocasio-Cortez illegally use Justice Democrats money and staff to give her an unfair advantage over former Representative Crowley?”

Former FEC chairman Brad Smith said Justice Democrats’ acknowledgment that Ocasio-Cortez was on the PAC’s board while it was supporting her primary campaign makes an investigation practically unavoidable.

“I don’t see how the FEC could not investigate that,” Smith said. “We’ve even got their own statement on their website that they control the organization. I don’t see how you could avoid an investigation on that.”

The complaint also alleges that Ocasio-Cortez was the beneficiary of a “subsidy scheme” operated by Justice Democrats, Brand New Congress PAC and Brand New Congress LLC, which enabled her to campaign to “evade contribution limits” and receive “heavily subsidized services at well below market value.”

Former FEC commissioner Lee Goodman explained on Fox Business in March that the Justice Democrats and Brand New Congress “enterprise” appears to have given a multi-million dollar subsidy to Ocasio-Cortez and the other political campaigns it supported.

“The enterprise of two political action committees and an LLC provided campaign support at a deficit — that is they spent about $3.3 million to support the campaigns of the congresswoman and others, and yet they charged the campaigns only about $300,000, and I think that looks like a potential $3 million subsidy to the campaigns they supported including the congresswoman’s because she paid only $60,000 for the service she received from this enterprise,” Goodman, a Republican, said.

Backer told TheDCNF: “No matter how they try to frame their scheme, the activities of [Justice Democrats] PAC and [Ocasio-Cortez] for Congress resulted in coordinated expenditures millions of dollars beyond the contribution limits that they failed to properly report, violating contribution limits, disclaimer requirements, and reporting requirements.”

Backer said he will sue the FEC for delay if the commission fails to act on his complaint within 120 days. Backer added that such an action could give him the opportunity to take the complaint to court, which he said would “force Ocasio-Cortez and these parties to intervene in defense of their actions.”

Ocasio-Cortez and Justice Democrats did not respond to a request for comment.

Coolidge Reagan Foundation … by on Scribd

Content created by The Daily Caller News Foundation is available without charge to any eligible news publisher that can provide a large audience. For licensing opportunities of our original content, please contact licensing@dailycallernewsfoundation.org.