New York Rep. Alexandria Ocasio-Cortez has painted a picture of herself as a tough woman from the Bronx but it appears to be a façade.

It has been alleged before that she was raised in the affluent Westchester region of New York and was a fraud.

She has strongly denied those accusations and insisted she was raised in the Bronx and Westchester.

But now that she is a Congresswoman she insists that she resides full time in the Bronx and her brand is built on that premise.

That is when she is not living in her luxury apartment in Washington D.C. that has no units for the poor people she says she represents.

Now a new story in The New York Post casts serious doubts on that assertion.

She may be America’s most famous freshman congresswoman, but in New York, Rep. Alexandria Ocasio-Cortez is a virtual ghost.

She has no district office and no local phone number, unlike the state’s three other freshman members.

And it’s unclear whether the 29-year-old lawmaker, who represents the Bronx and Queens, actually still lives in the Parkchester neighborhood that has been so closely tied to her rise — even though she won her upset victory over fellow Democrat Rep. Joe Crowley with accusations that his home in Virginia made him too Washington-focused to serve his district.

Ocasio-Cortez has used her deceased father’s Bronx condo on her voter registration since 2012, and even posed in the one-bedroom Bronx flat for celebrity photographer Annie Leibovitz in a Vogue magazine profile after her stunning November election. But The Post could find little indication she continues to live there.

The Post e-mailed the Ocasio-Cortez’ spokesman, Corbin Trent, four times with specific questions — they were all ignored. On Saturday, The Post reached Corbin by phone.

“We will not be commenting,” he said. Among the queries he refused to answer: Where does the congresswoman live?

Ocasio-Cortez herself told a Post reporter that she would talk to him after an event on Saturday and had him wait for her downstairs.

But after 20 minutes of waiting and after her staffers read an advanced copy of the story exposing her, he found that she had snuck out the back door and left in a limousine.

The reporter spoke to neighbors of Ocasio-Cortez and found out some oddities in her Bronx story.

Her next door neighbor told The Post that she has never met the 29-year-old Congresswoman.

A postal worker said that in 10 years of delivering mail to the apartment he has only seen her occasionally and that her mail piles up for months.

“Just because their names are on the box doesn’t mean they live there,” he told The Post.

“Constituents come here and leave notes on the door,” he said. “But it’s a waste of time.”

Thanks to our good friends at The Federalist Papers for permission to republish this material. 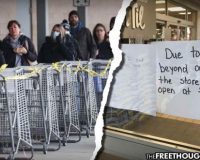