An old tweet from Kamala Harris has surfaced and it has her in an uncomfortable position.

The tweet was from 2017 when Sen. Harris congratulated Gov. Ralph Northam on defeating his opponent Ed Gillespie.

“Congratulations to @RalphNortham and his team for showing that Virginia won’t stand for hatred and bigotry,” she said.

Congratulations to @RalphNortham and his team for showing that Virginia won’t stand for hatred and bigotry.https://t.co/ptKySwzmMC

What makes the tweet notable is that Northam campaigned on painting Gillespie as a racist.

He even went as far as to have a truck that was supposed to be driven by Gillespie chasing minority children in a campaign ad.

Now Sen. Harris’ tweet is biting her because Virginia did not say no to hatred and bigotry.

Now Sen. Harris has responded by calling for Gov. Northam to resign.

“Leaders are called to a higher standard, and the stain of racism should have no place in the halls of government. The Governor of Virginia should step aside so the public can heal and move forward together,” she said.

Leaders are called to a higher standard, and the stain of racism should have no place in the halls of government. The Governor of Virginia should step aside so the public can heal and move forward together.

The state actually elected hatred and bigotry when it elected Northam as its governor. 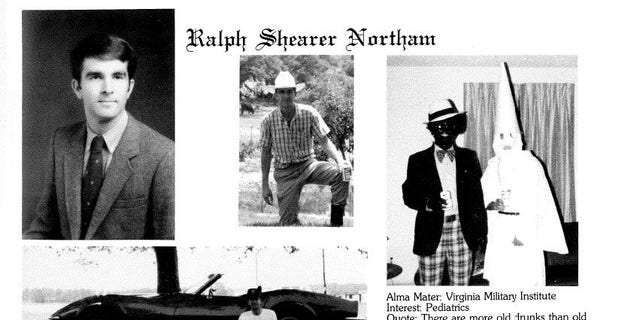 The Washington Post reported on the story after it broke.

The image is in a 1984 yearbook from Eastern Virginia Medical School on a page with other photos of Northam and personal information about the future governor.

Northam, a pediatric neurologist, graduated from the Norfolk medical school in 1984 after earlier graduating from Virginia Military Institute.

The page is labeled Ralph Shearer Northam, along with pictures of him in a jacket and tie, casual clothes and alongside his restored Corvette.

It shows two people, one in plaid pants, bow tie and black faced, and the other in full Klan robes. Both men appear to be holding beer cans.

The person in black face is smiling. Beneath the photo is a writeup about Northam listing his alma mater, noting that his interest is pediatrics and giving a quote: “There are more old drunks than old doctors in this world so I think I’ll have another beer.”

A spokeswoman for the governor did not have an immediate response.

The Washington Post independently confirmed the authenticity of the yearbook; it is available in the public library maintained by the medical school in Norfolk.

The revelation comes amid a wild week in which Northam was accused of advocating infanticide after he made comments defending a bill that would have lifted restrictions on late-term abortions.

Thanks to our good friends at The Federalist Papers for permission to republish this article.