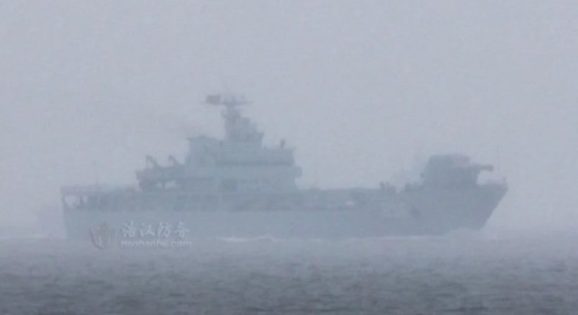 The Type 072II Yuting-class tank landing ship Haiyangshan has set sail for possible testing in the open ocean.  The navy warship is equipped with what appears to be an electromagnetic railgun.

According to Science Alert, the weapon mounted on the warship was seen along the Yangtze River at the Wuchang Shipyard in Wuhan earlier this year. According to a separate report by Task & Purpose, the latest photos of the test bed ship, which appeared on social media a few days ago, show the ship mounted with the suspected railgun on the vessel as it roams the high seas.

China’s futuristic electromagnetic railgun may already be the most powerful cannon to ever roam the high seas and is ahead of schedule. New photos appear to show the railgun perched on the bow of its test ship at sea. Chinese media outlets, such as the state-affiliated Global Times, revealed in March that nearly two months after the first pictures of what was dubbed the “Yangtze River Monster” showed up online, the Chinese People’s Liberation Army Navy is “making notable achievements on advanced weapons, including sea tests of electromagnetic railguns.”

This is clearly the Haiyang Shan, the same Type 072III-class landing ship that was spotted back in January 2018 docked at the Wuchang shipyard in China’s central Hubei province, the largest of the People’s Liberation Army Navy’s inland shipyards and a major production hub for the country’s conventional submarines, reported Task and Purpose.

What the hell is this? pic.twitter.com/sQDAsHd7A3

The Chinese railgun was first developed in 2011 and tested in 2014, however, a government-run news outlet claimed in February that the Chinese navy had achieved a “breakthrough” during the sea trials for the new railgun. The June United States intelligence assessment suggests the supergun underwent trials even earlier than the PLA said, with initial tests underway as early as December 2017.