Actor James Cromwell walked back remarks about a violent “revolution” following a loss for the Democratic Party in next week’s midterms, saying they were “taken out of context,” FOX NEWS reports.

Cromwell, famous for his roles in  “Babe,” “The Green Mile” and “American Horror Story,” faced major backlash after cautioning there would be “blood in the streets” if Republicans remain in control.

“This is nascent fascism. We always had a turnkey, totalitarian state — all we needed was an excuse, and all the institutions were in place to turn this into pure fascism,” Cromwell said during a red carpet interview with Variety. “If we don’t stop [President Trump] now, then we will have a revolution for real. Then there will be blood in the streets.”

Cromwell was quick to blame the media and not himself for he said, stating that the media took it out of context and that he is pacifist.

Not promoting violence, voting against it. You will never see me raising a fist. I’m a pacifist. My words were taken out of context. I’m worried about the blood of the dissent, protesters, more children shot at school, people shot while praying, for who they love and who they are. 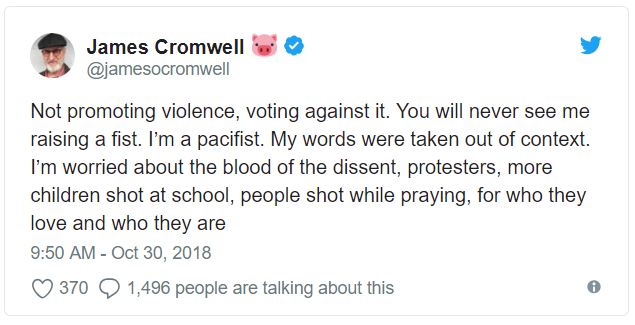 “If we don’t stop [President Trump] now, then we will have a revolution for real. Then there will be blood in the streets.”
There is no denying what he said and why he said it, it is the same rhetoric that the Democratic party has been threatening us with for months now, if they do not win they will riot and attack any who opposed them.
Be careful what you wish for Democrats, because you are going to lose and you will have to back up your threats.

Vengeful Trump-Haters To Try Banning Trump From Running For President For The Rest Of His Life
January 21st, 2021 Conservative Firing Line