A refugee has been caught in the nick of time as he was making bombs to prepare for a terror attack, but the mainstream media wants to hide it from you.

Ahmad Suhad Ahmad, a refugee from Iraq, was caught in an undercover sting operation by the FBI making bombs in his Las Vegas hotel.

This is the reason you have to vet “refugees” as they attempt to flood into the United States.

Not every one of them is a freedom seeking migrant looking for a better life. Some of them want to take yours.

It is also the reason you have to vet stories from the mainstream media as it will do anything to push the idea that all refugees are good and there is no danger.

Take a look at how the story was framed by NBC News, who attempted to make it look like the terrorist was a natural born American.

An Arizona man has been charged with distributing instructions on how to make explosives after he traveled from Tucson to Las Vegas in order to help undercover FBI agents construct a bomb, according to a federal complaint unsealed Monday.

Ahmad Suhad Ahmad, born in 1988, was scheduled to appear in federal court for a preliminary hearing Wednesday. His attorneys requested a two day continuance.

NBC News reached out to Ahmad’s federal public defender but did receive an immediate response.

In late 2016, the filing in U.S. District Court in Arizona alleges, the suspect told an FBI informant that “he knew how to detonate a bomb by using a cellular phone with a removable cellular battery.”

The suspect told the informant he learned the detonation technique during “the war in Iraq,” according to the complaint, which does not specify whether Ahmad, a U.S. citizen, ever served in the U.S. military.

An Arizona man? Come on NBC do better. This is why people call you fake news.

Nowhere in the story was it mentioned that he was from Iraq or that he was a refugee, which would seem like a pertinent piece of information.

The Daily Mail, who broke the story, explained in its headline that the man was a refugee and also noted, as NBC did not, that the man was planning to use the bomb, if not for a terror attack, in an assassination attempt. 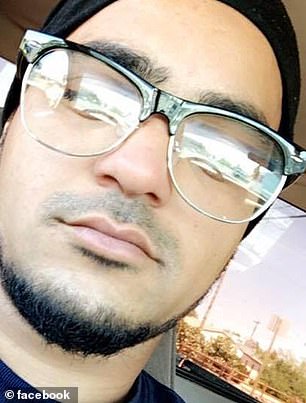 According to the documents Ahmad first told the FBI confidential source he knew how to detonate a bomb in December, 2016 and showed the source an image of explosive materials and instructions on his cellphone.

Ahmad, it states, explained the instructions in Arabic, not in English. But it wasn’t until April the following year that the plans for a potential terror attack or assassination swung in to play.

Interesting. The media, particularly CNN, gave wall to wall coverage of the #MAGABomber who made rudimentary bombs that had absolutely no one in danger, yet they remain mum on this one.

But rest assured, he might be an insane bomber looking to assassinate an American, but he supports refugees.

On his Facebook he posted a photo of himself with three children, with the graphic, ‘I stand with Refugees’.

Well then, what a swell fellow.

Be the first to comment on "BOOM! Refugee Busted Making Bombs For ASSASSINATION- Media Covers Up Story"