A study by the Election Integrity Project shows there are 3.5 million more people registered to vote than there are living American citizens, which is an invitation to voter fraud:

My tabulation of Judicial Watch’s state-by-state results yielded 462 counties where the registration rate exceeded 100 percent. There were 3,551,760 more people registered to vote than adult U.S. citizens who inhabit these counties.

“That’s enough over-registered voters to populate a ghost-state about the size of Connecticut,” Judicial Watch attorney Robert Popper told me.

These 462 counties (18.5 percent of the 2,500 studied) exhibit this ghost-voter problem. These range from 101 percent registration in Delaware’s New Castle County to New Mexico’s Harding County, where there are 62 percent more registered voters than living, breathing adult citizens — or a 162 percent registration rate.

Washington’s Clark County is worrisome, given its 154 percent registration rate. This includes 166,811 ghost voters. Georgia’s Fulton County seems less nettlesome at 108 percent registration, except for the number of Greater Atlantans, 53,172, who compose that figure.

But California’s San Diego County earns the enchilada grande. Its 138 percent registration translates into 810,966 ghost voters. Los Angeles County’s 112 percent rate equals 707,475 over-registrations. Beyond the official data that it received, Judicial Watch reports that LA County employees “informed us that the total number of registered voters now stands at a number that is a whopping 144 percent of the total number of resident citizens of voting age.”

All told, California is a veritable haunted house, teeming with 1,736,556 ghost voters. Judicial Watch last week wrote Democratic secretary of state Alex Padilla and authorities in eleven Golden State counties and documented how their election records are in shambles.

“California’s voting rolls are an absolute mess that undermines the very idea of clean elections,” said Judicial Watch president Tom Fitton in a statement. “It is urgent that California take reasonable steps to clean up its rolls. We will sue if state officials fail to act.” 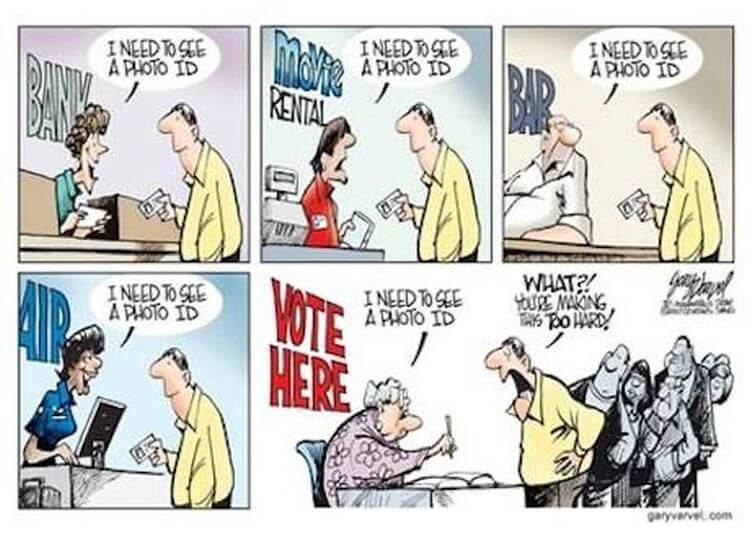 This is EXACTLY why Democrats are so opposed to Voter ID.

*ATTENTION! FACEBOOK HAS JUST DELETED ALL OF OUR PAGES INCLUDING NATION IN DISTRESS AND AMERICAS FREEDOM FIGHTERS FOR ABSOLUTELY NO REASON BUT FOR THE FACT THAT WE ARE PRO TRUMP, PRO MILITARY, PRO LEO AND WE ARE NOT LIBERAL/SOCIALISTS. THEY DELETED 559 PAGES AND 251 ACCOUNTS RIGHT BEFORE THE ELECTIONS AND THIS IS JUST THE BEGINNING. SPREAD THE NEWS. THIS JUST HAPPENED AND AS A RESULT THEY HAVE PUT THOUSANDS OF PEOPLE AND VETERANS OUT OF WORK. SPREAD THE WORD! THANK YOU.

THIS IS A DIRECT AND TARGETED ATTACK BY FACEBOOK AGAINST CONSERVATIVE NEWS OUTLETS. STAY TUNED- IT’S GOING TO GET UGLY!

Be the first to comment on "3.5 Million DEAD People Registered to Vote"