A group of Antifa protesters in Portland, Oregon harassed an old man this week for disobeying their traffic orders, with apparently no action taken against them by the Portland police.

A report from the Wall Street Journal from August details the a wave of anarchy taking over Portland, Oregon. Antifa and Black Lives Matters protests have been taking to the street and blocking traffic in an effort to bring attention to various social issues.

A mob surrounded ICE’s office in Southwest Portland June 19. They barricaded the exits and blocked the driveway. They sent “guards” to patrol the doors, trapping workers inside. At night they laid on the street, stopping traffic at a critical junction near a hospital. Police stayed away. “At this time I am denying your request for additional resources,” the Portland Police Bureau’s deputy chief, Robert Day, wrote to federal officers pleading for help. Hours later, the remaining ICE workers were finally evacuated by a small federal police team. The facility shut down for more than a week, Breitbart reports.

If you don’t know what Antifa (Anti-fascist) is, they’re the black hoodie and bandanna bedecked middle class (mostly lily white) kids that are claiming to stand up to white supremacy, homophobia, misogyny, and fascism by showing up en masse to events or marches and — if they’re not intimidating people — are violently attacking people who slightly disagree with them.
Antifa is more than just youngsters getting dropped off at the protest by their mom, and yelling at people. They want to hurt people, and I don’t mean just the random punch and kick. They want to stab and shoot people. 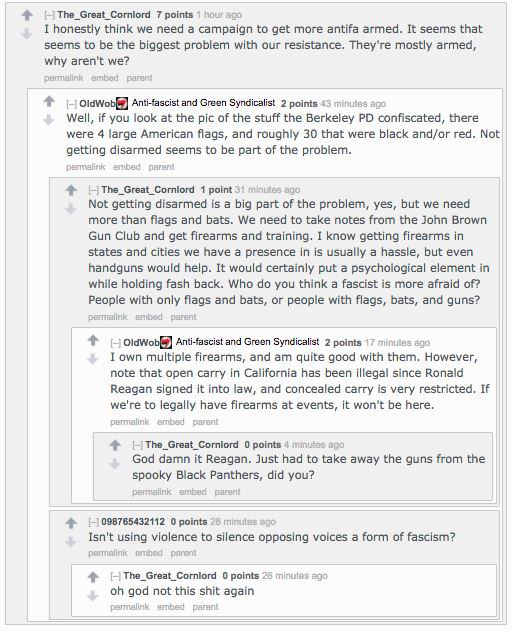 The most stunning part of this is the video that shows a Portland motorcycle cop standing close by and doing nothing as hooligans threaten drivers (“I’ll kick your ass”) and block streets (illegal) …and police commissioner Ted Wheeler has apparently tied the officer’s hands. FM News 101

And here is video of an elderly man who didn’t heed their street orders — so they chased him down. #Portland https://t.co/AeXvhUKijO

These protests and riots are largely kept out of the mainstream news and Portland is not the only city dealing with these millennial temper tantrums.  The local Police Departments are having a hard time dealing with these tantrums, though in some cases, like Portland, the Police Departments are very liberal minded.
Can you imagine dealing with this in your streets as you drive to work or go get groceries?  We suffer that which we tolerate and I say it is high time to stop tolerating these clowns and they need shut down and shut down now.