California Governor’s Veiled Threat To Trump: ‘Something’s Got To Happen To This Guy’ 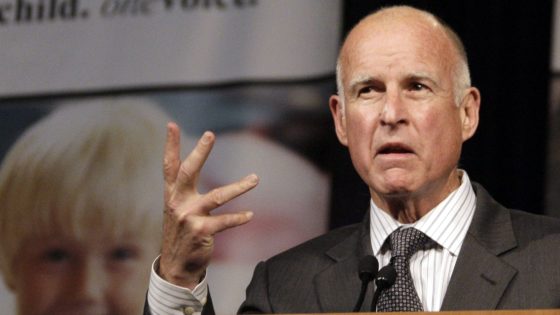 California governor Jerry Brown recently spoke a veiled threat to president Donald Trump.  Brown is dissatisfied with Trump’s stance on the often altered “science” of “climate change”and said, “something’s got to happen to this guy.”

In an interview that aired Monday, Jerry Brown called the president a “saboteur” in the fight to combat climate change, and in a thinly veiled threat said that “something’s got to happen to this guy.” Speaking to MSNBC’s Andrea Mitchell at an environmental summit in San Francisco last week, Brown tore into Trump for the president’s tweets about the death toll in Puerto Rico from last year’s Hurricane Maria and urged voters to vote for Democrats in November’s midterm elections in an effort to thwart Trump’s agenda, according to Fox News.

Brown was quoted as saying:

“We never had a president who was engaged in this kind of behavior. I mean he’s not telling the truth; he keeps changing his mind; he’s sabotaging the world order in many respects.”

“It’s unprecedented, it’s dangerous, and hopefully this election is going to send a strong message to the country; the Democrats will win…something’s got to happen to this guy, because if we don’t get rid of him, he’s going to undermine America and even the world.”

There’s nothing like a little fear-mongering to get people to vote themselves into slavery. “California has positioned itself as the center of the Trump resistance,” Jessica Levinson, a clinical law professor at Loyola Law School in Los Angeles, told Fox News. “It’s bloody combat.”

Shortly before the climate conference began last week, California’s socialist governor also signed a piece of legislation that will require the phasing out of all electricity in the state produced by fossil fuels by 2045. “It’s really extraordinary that the president can deny science like that,” Brown told MSNBC of Trump’s questioning the veracity of climate change. “It’s bad, and how we counteract it is with a climate summit, with normal people respecting the truth, and communicating that with other normal people, and combating the President of the United States in what are lies, distortions, and quite frankly, bizarre behavior.”

But the Trump administration hasn’t cowered to Brown’s threats a fear mongering. The administration announced on Tuesday that it was rolling back an Obama-era rule meant to curb climate-changing pollution and easing restrictions on energy companies that allow huge volumes of natural gas to escape after drilling it from land in the United States.