Senate Judiciary Committee chairman Chuck Grassley sent a letter to Christine Blasey Ford’s attorney Wednesday making a final request that Ford attend a committee hearing scheduled for Monday and making clear that the FBI has no jurisdiction to investigate her claim prior to the hearing.

In the letter, Grassley explains that the Senate is charged with investigating the claim under its constitutional “advise and consent” duty.

“The FBI does not make a credibility assessment of any information it receives with respect to a nominee. Nor is it tasked with investigating a matter simply because the Committee deems it important,” the letter reads. “The Constitution assigns the Senate and only the Senate with the task of advising the President on his nominee and consenting to the nomination if the circumstances merit. We have no power to commandeer an Executive Branch agency into conducting our due diligence.” 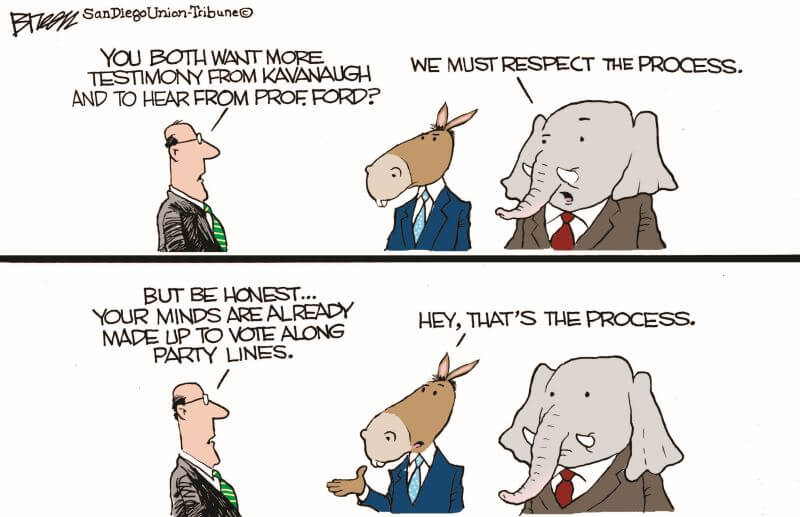 Read the whole thing for yourself:

“Thank you for your letter dated September 18, 2018. I was disturbed to read that your client and  her family have received threats of intimidation. That’s never appropriate and no one should be subject to that behavior.

The Federal Bureau of Investigation has supplemented Judge Kavanaugh’s background investigation file in light of the allegations raised by your client, Dr. Christine Blasey Ford. The Committee’s standard procedure for supplemented background investigations is to conduct phone or in-person interviews with the relevant parties to discuss the underlying ssues. To that end, Committee staff has attempted to contact you directly by phone and e-mail several times to schedule a call at a time convenient for you and your client. We thus far have not heard back from you with regard to that request. Please contact Committee staff at your earliest convenience to schedule that call at a time convenient for you and your client.As you know, I have reopened the hearing on Judge Kavanaugh’s nomination in light of Dr. Ford’s allegations. That hearing will begin again on Monday, September 24, at 10:00 a.m. I have invited Dr. Ford to testify regarding her allegations against Judge Kavanaugh. And in recognition of how difficult it can be to discuss allegations of this kind in public, I have also offered her the choice of testifying in either a public or closed session of the hearing. In response to my invitation, however, you wrote yesterday that “an FBI investigation of the incident should be the first step in addressingher allegations.”

I certainly understand and respect Dr. Ford’s desire for an investigation of her allegations. That is precisely what the Senate is doing. That is why our investigators have asked to speak with your client. That is why I have invited Dr. Ford to tell her story to the Senate and, if she so chooses, to the American people. It is not the FBI’s role to investigate a matter such as this. Before nominating an individual to a judicial or executive office, the White House directs the FBI to conduct a background investigation. The FBI compiles information about a prospective nominee and sends it to the White House. The White House then provides FBI background investigation files to the Senate as a courtesy to help us determine whether to confirm a nominee. The FBI does not make a credibility assessment of any information it receives with respect to a nominee. Nor is it tasked with investigating a matter simply because the Committee deems it important. The Constitution assigns the Senate, and only the Senate, with the task of advising the President on his nominee and consenting to the nomination if the circumstances merit. We have no power to commandeer an Executive Branch agency into conducting our due diligence. The job of assessing and investigating a nominee’s qualifications in order to decide whether to consent to the nomination is ours, and ours alone.

I have reopened the hearing because I believe that anyone who comes forward with allegations of sexual assault has a right to be heard, and because it is the Committee’s responsibility to fully evaluate the fitness of a nominee to the Supreme Court. I therefore want to give Dr. Ford an opportunity to tell her story to the Senate and, if she chooses, to the American people. I also want to give Judge Kavanaugh an opportunity to respond to the allegations. By hearing out both Dr. Ford and Judge Kavanaugh, the Committee will endeavor to discover the truth of the matter, and will be better able to make an informed judgment about Judge Kavanaugh’s nomination.

You have stated repeatedly that Dr. Ford wants to tell her story. I sincerely hope that Dr. Ford will accept my invitation to do so, either privately or publicly, on Monday. In the meantime, my staff would still welcome the opportunity to speak with Dr. Ford at a time and place convenient to her.

And I remind you that, consistent with Committee rules, Dr. Ford’s prepared testimony and biography are due to the Committee by 10:00 a.m. on Friday, September 21, if she intends to testify on Monday.

We want to thank our good friends at The Federalist papers for permission to republish this article.