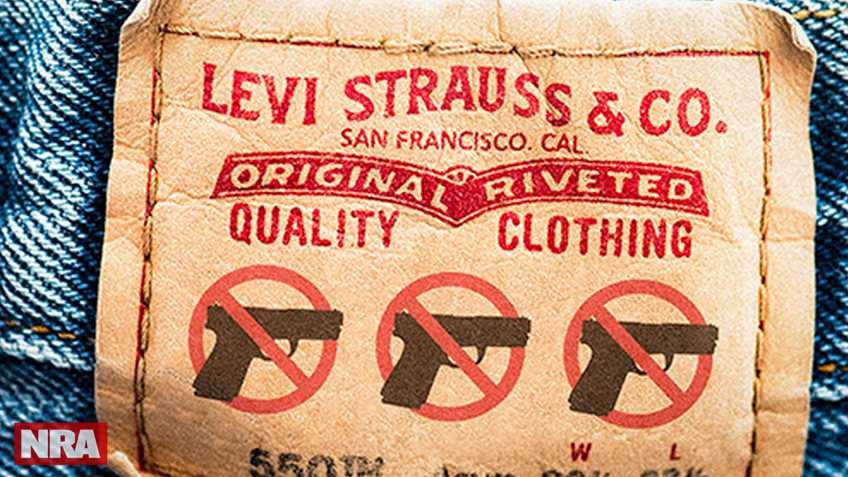 Levi Strauss & Co. established its brand in the mid-19th century by selling durable clothing to working-class Americans. As Levi’s signature jeans gained popularity amongst a wider set in the middle of the last century, the pants came to symbolize American freedom. As Stanford Historian Niall Ferguson points out in his book, Civilization: The West and the Rest, during the Cold War, the American pants were so desirable behind the Iron Curtain that citizens would break any number of laws to obtain them. At one point the company even celebrated America’s armed heritage in a circa 1950 advertising brochure, “Levi’s Gallery of Western Guns & Gunfighters.” It’s with some irony then that Levi’s has abandoned this rugged image to team up with a billionaire oligarch in an effort to empower the government to trample upon the fundamental rights of the American people.

On September 4th, Levi’s CEO Chip Bergh announced that the San Francisco-based clothing manufacturer (which also owns Dockers) would openly advocate for gun control. As part of this campaign, the company will donate more than $1 million to radical anti-gun groups, including Michael Bloomberg front-group Everytown for Gun Safety and Giffords, formerly Americans for Responsible Solutions and the Legal Community Against Violence. The company will also match employee donations to these groups and is encouraging its staff to devote their time to anti-gun activism.

Among gun owners, Levi’s intemperate foray into the world of gun control politics has been met with the disgust it deserves. However, it shouldn’t be met with surprise.

Much like Bloomberg’s Everytown, PAX placed an emphasis on attracting corporate partners to their gun control efforts. As part of Levi’s relationship with PAX, in 1999 the apparel company teamed up with the band Goo Goo Dolls to attract support for the anti-gun group during the Levi’s Fuse ’99 summer concert tour. Concert goers, and visitors to Levi’s website, were encouraged to sign the PAX Youth Petition. Moreover, the denim company donated a percentage of all Levi’s Fuse ’99 t-shirt proceeds to the gun control group.

The PAX Youth Petition endorsed a variety of severe gun control measures that have repeatedly been rejected by the American public through their elected representatives. The document called for the “licensing and registration of guns, like automobiles.” The petition also demanded the “elimination of assault weapons and other weapons of war.” As the 1994 Clinton “Assault Weapons” ban was in place at the time of the petition, this imprecise demand appeared to call for prohibiting the sale of the remaining lawful semi-automatic firearms, confiscation of the firearms grandfathered under the ban, or both.

Given the majority of Levi’s 165-year history, Bergh’s decision to use a formerly-quintessential American company to attack a quintessential American right is a particularly sad episode in the current surge in corporate virtue-signaling. We can only assume that Levi’s accountants have determined that resulting skinny jeans sales will be enough to offset the permanent damage to their once-cherished brand.

I’m so sick of this liberal bullsh*t.