– Why Isn’t The Canadian Government Talking About This?

By Stefan Stanford – All News Pipeline – Live Free Or Die
In this new story over at Ammoland Shooting Sports News they report upon a very large elephant in the room in Canada, and thus North America, that everybody has missed regarding the recent terror attack in Toronto that resulted in the deaths of 2 with 13 injured. Less than a year earlier, one Fahad Hussain, the brother of Toronto terrorist Faisal Hussain, had the home where he had lived raided by police who found not only 33 guns but 42 kilograms of Carfentanil, a drug called 100 times more dangerous than Fentanyl.

As the Ammoland story reports, while discovered by drug dealers, Carfentanil can also be used as a chemical weapon and can be purchased online and has been banned from battlefield use by the Chemical Weapons Convention. And while nowhere near as well known as Fentanyl and the rash of deaths it has caused to drug users all across America, Ammoland reports the amount of Carfentanil found in the home of the Toronto terrorist’s brother last September was the equivalent of 2.1 billion FATAL doses of the drug. 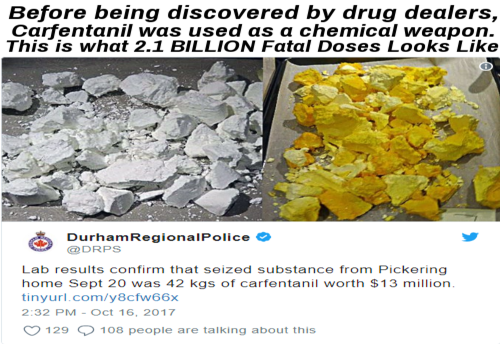 And while the government of Toronto and in Canada have been attempting to sweep the Carfentanil and gun stash that was found under the rug, labeling it as ‘run-of-the-mill’ drug dealing, the Ammoland story wisely points out: What ‘run-of-the-mill drug dealer’ can sell 2.1 billion doses of ANY drug, much less something as lethal and deadly as Carfentanil?

Suggesting in their story that the Carfentanil was meant for something else other than being sold by drug dealers to drug users, Ammoland then went on to drop this absolute bombshell.:

And the government does not want to talk about this terrorist plot.

Public Safety Minister Ralph Goodale is on record saying the Danforth killer was not known to his ministry. That’s possible, but very unlikely. With a brother in possession of enough poison to kill the entire country dozens of times over, the odds of the Danforth killer NOT being on federal radar are pretty small. 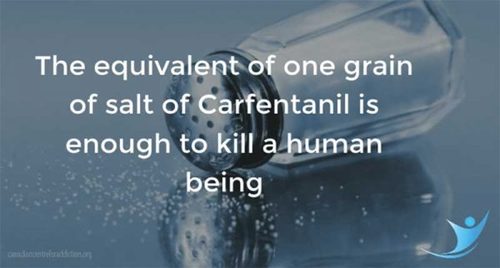 In fact, 2.1 billion fatal doses of Carfentanil is enough to kill every person in North America several times over with the current population of North America just over 500 million people according to Wikipedia.

And while that hugely unreported story happened in Canada, as we see detailed within the rest of this ANP story, what much of the mainstream media have long called a ‘conspiracy theory’ has once again been confirmed here in America.

According to this August 6th story over at the Daily Mail, a heavily armed extremist Muslim compound was recently broken up in the state of New Mexico with three Islamic mothers being arrested for abusing and starving their 11 children and as this new story over at Fox News reports, the father of a missing 3-year-old who was arrested at a New Mexico compound linked to “extremist Muslims” last week was training children to commit school shootings, court documents filed on Wednesday revealed.

How many more such ‘compounds’ are there in America? We may never find out due to the 8 years of the administration of Barack Obama in which none other than Robert Mueller had all materials pertaining to Islamic terrorism purged from the training manuals of federal law enforcement according to this 2017 Conservative Review story. 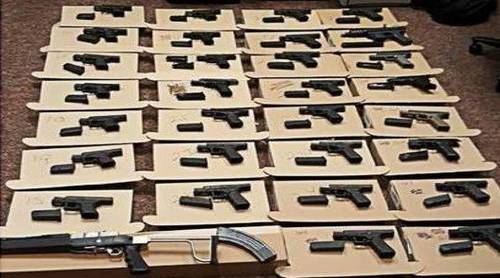 While Mic News wrote a story back in 2016 in which they reported then President-elect Donald Trump was fueling bizarre conspiracy theories about Barack Obama actually protecting 22 Islamic training camps here in America and that he’d eventually use them to attack President Trump, what happened to all of the guns and billions of rounds of ammo that Obama purchased, allegedly for federal government agencies that had no need for them?

As we hear in the 2nd video below from videographer JB Gunner TV, the entire illegal immigration battle that is now going on is about so much more than just ‘immigration’. With Barack Obama’s ‘open doors to terrorists’ policy for 8 years allowing practically anybody who wanted to come into America to get in here, how many more such ‘camps’ or ‘cells’ that were found in New Mexico and Toronto are still active and undiscovered?

And how many jihadists who were able to legally enter Canada might have their end game be an easy trip over the US/Canadian border to get into the US when their country may have been one of those blocked by President Trump’s current immigration order? With Canadian Prime Minister Justin Trudeau having already fully capitulated to Islam and the globalists agenda and Canada coddling terrorists, what happened last September in Canada when police thankfully found enough chemical weapon to kill every human being in North America should be a wake up call.

As we had reported on ANP back on August 6th, pro-ISIS media is now calling for their followers to carry out biological attacks on the West, nearly a year after that massive cache of deadly Carfentanil was discovered.

By Stefan Stanford – All News Pipeline – Live Free Or Die

Be sure to check out our friends at ALL NEWS PIPELINE!