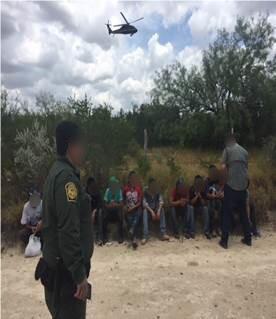 Later that afternoon, McAllen agents observed illegal aliens getting into a Chevrolet Equinox near La Joya, Texas. Additional agents responded and located the vehicle near Military Road and Banworth Canal. When agents encountered the vehicle, they observed several subjects fleeing the scene. Agents apprehended seven subjects who were all determined to be illegally present in the United States.

On Tuesday, McAllen agents responded to a report of illegal aliens traveling in a Buick sedan. When agents located the vehicle, it came to a stop and multiple subjects exited. Agents apprehended one illegal alien and the United States citizen driver.  All other subjects absconded back to Mexico.

That same day, Kingsville agents apprehended two United States citizens attempting to smuggle four illegal aliens through the Sarita checkpoint. Due to a K-9 alert, two vehicles were referred to secondary for inspection. While in secondary, agents discovered two subjects hidden in the truck of each vehicle.

Also in Kingsville, agents arrested two truck drivers who are United States citizens as they attempted to smuggle two illegal aliens in the air dam of the trailer they were driving.

A Falfurrias agent stopped to render aid to a motorist with a flat tire on Highway 281. As agents approached, they noticed a person concealed underneath blankets in the rear seat. During a search of the vehicle, agents discovered a juvenile stuffed inside a duffel bag on the back seat.

Agents arrested the driver, who is a United States citizen, and the both passengers who were illegally present in the United States.

All cases remain under investigation and all subjects will be processed accordingly.

The Rio Grande Valley Sector currently has multiple campaigns focused on rescues and danger awareness, such as “Operation Big Rig” and “No Se Arriesgue” to combat smuggling and ultimately save lives. Call 911 to report suspicious activity; “They’re humans, not cargo!”

Please visit www.cbp.gov to view additional news releases and other information pertaining to Customs and Border Protection. Follow us on Twitter at @CBPRGV.