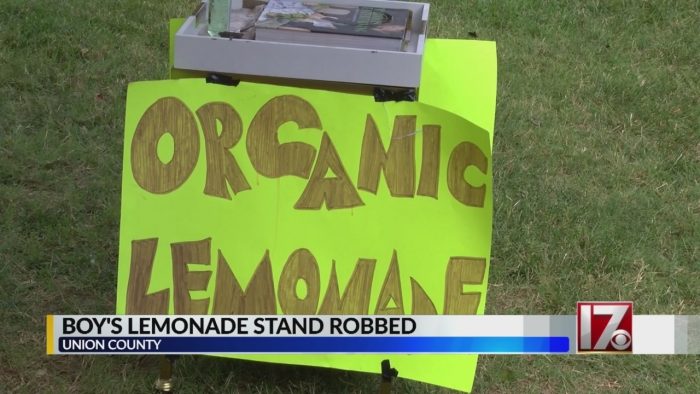 “Never had an incident like this, never thought this would happen,” said the boy’s father, Philip Smith, Fox News reports.

UNION COUNTY, NC (FOX 46 WJZY) – Deputies in Union County are investigating an armed robbery of a 9-year-old boy’s lemonade stand. It happened Saturday afternoon around 3 p.m. in Monroe.
Union County deputies responded to the quiet St. John’s Forest neighborhood for reports that a teenager walked up to a lemonade stand, stuck a gun to a 9-year-old boy’s stomach and demanded money. He got $17…
“I think people are capable of a lot of things, but not robbing a child at a lemonade stand, that takes it to a new level,” said Tony Underwood with the Union County Sheriff’s Office

According to the sheriff’s department, the boy was approached by a teenage boy wearing a camouflage hat and black T-shirt. “The suspect allegedly stuck a black handgun to the boy’s stomach, demanded money and fled the scene on foot,” the sheriff’s department said in a statement on social media. Police recovered a metal tin, camo hat and black bb gun in a wooded area near the neighborhood as well as a bicycle they believe the suspect used.  So far there aren’t any leads on a suspect.
The boys parents explained to the 9 year old that sometimes in life, bad things happen to good people and that people must move forward and not be afraid.  The boy and his parents re-opened the lemonade stand and are trying to teach the boy that you never give up.
It takes a special kind of scumbag to rob a 9 year old by selling lemonade and we can only hope that the policed department can find the teen who cowardly scared a boy and stole his money.