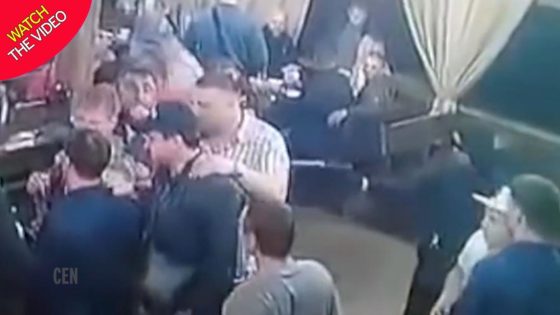 A Russian mafia boss was recently gunned down at a party he threw to celebrate his release from prison by a hooded assassin.  The macabre killing was caught on video and captures how Alexander Zhestokov was approached from behind by an assassin who opened fire from close range.

*The following video is graphic and not suitable for everyone.  It will show Zhestokov being shot.

Lika a ninja, the assassin can be seen sneaking in and leaving the scene. After unloading several rounds into the suspected mob boss,  Zhestokov falls onto the floor and appears to cover his face before falling still. A friend turns his body so he is face down. His associates appear shocked at first but within seconds of the contract killing, they flee the restaurant in the Kemerovo region of Siberia, a major coal mining area. No one tries to detain the assassin as he flees.

Zhestokov, who is 39 years old, is a suspected Siberian mobster and rumored to be the leader of the feared Zapsibovskie gang, died instantly after being shot on July 27 of this year at somewhere near midnight, according to a report by the Daily Mail. Zhestokov had been hosting a party in Dzambul bar in the industrial city of Novokuznetsk, south-west Siberia.

According to the Daily Mail, the police have opened a murder probe and cordoned off the scene.  Zhestokov was shot six times in the back. The murder weapon has not been found and the region’s top policeman Major-General Igor Ivanov has taken personal control of the investigation, reports local media.

“The police are now locating the witnesses and studying the connections of the victim,” said a spokesman for the local Investigative Committee in charge of investigating serious crimes. “Investigators are considering various versions of the murder, including the criminal ties of the victim.”

From Mac Slavo at SHTFplan.com