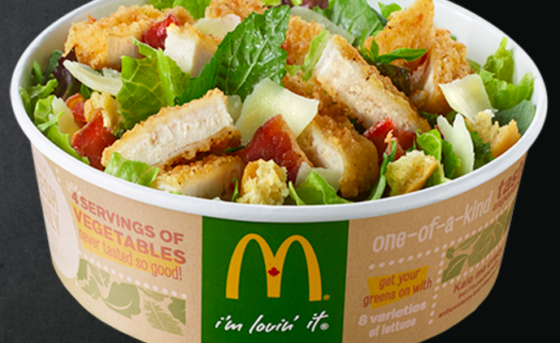 The fast food restaurant McDonald’s is having problems after a parasite outbreak linked to their salads is sickening people in 15 states.  So far, 286 have become ill after ingesting the parasite found in the salads served at the restaurant.

As of July 26, the Centers for Disease Control and Prevention (CDC) reports a total of 286 people in 15 states have been infected with a parasite called Cyclospora, an increase of 120 people in the last week alone, according to ABC News. So far, 11 people have been hospitalized, but thankfully, no deaths have been reported.

McDonald’s has voluntarily recalled their salads from over 3000 restaurants across 14 states beginning on July 13. But the people who ate those contaminated salads before July 13th may just be starting to develop symptoms which would prompt them to seek medical attention. Therefore, the official number of people infected by this parasite may continue to increase in the next few weeks as more reports come in.

*Dean James at Right Wing Tribune has this-

Obviously, food safety measures, such as washing produce, can prevent the Cyclospora from being ingested. Peeling and cooking vegetables can also ensure parasites and infectious bacterium are killed before it’s eaten.

“It’s a myth that a little bit of dirt doesn’t do you any harm,” says Dr. Andrew Wadge, a  chief scientist of the Food Standards Agency (FSA) in the United Kingdom. “Soil can sometimes carry harmful bacteria and, although food producers have good systems in place to clean vegetables, the risk can never be entirely eliminated.”

When you wash vegetables, wash them under a running tap and rub them underwater, for example in a bowl of fresh water. Start with the least soiled items first and give each of them a final rinse. Washing loose produce is particularly important as it tends to have more soil attached to it than pre-packaged fruit and vegetables. It is advisable to wash all fruit and vegetables before you eat them to ensure that they are clean and to help remove bacteria and parasites from the outside.

The health and safety of our customers and the people who work in McDonald’s restaurants is always our top priority. The additional states identified by the FDA and CDC are among the same states where a week ago we proactively decided to remove our lettuce blend in impacted restaurants and replace it through a different supplier. McDonald’s is committed to the highest standards of food safety and quality and we continue to cooperate and support regulatory and public health officials in their investigations. For those seeking additional information about Cyclospora, we encourage them to visit the CDC and FDA websites.